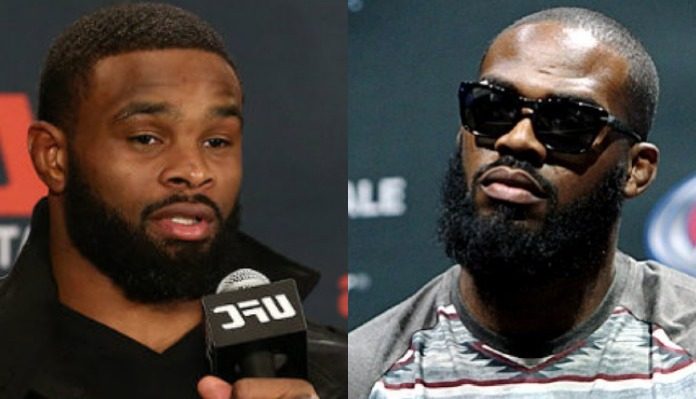 Tyron Woodley is perplexed by Israel Adesanya’s decision to move up to 205lbs immediately after Jon Jones left the division.

Last summer it appeared that a potential showdown between Jones and Adesanya was a real possibility. However, the potential super-fight was shutdown after ‘Stylebender’ stated that he intended on clearing out the promotions middleweight division before making a move up to light heavyweight.

Following that news, Jon Jones announced that he would be moving up to heavyweight in hopes of becoming the “Baddest man on the planet” by dethroning Stipe Miocic.

Weeks later UFC President Dana White made the shocking announcement that Israel Adesanya would be moving up to 205lbs to challenge newly crowned light heavyweight champion Jan Blachowicz at UFC 259.

That news simply bewildered former welterweight champion Tyron Woodley, who shared his confusion in a recent interview with Helen Yee.

“I thought he had some business to do in the middleweight division and he was going to wait, and the second Jon Jones moved up to heavyweight, he moved up to 205,” Woodley said (via MMAJunkie).

“I couldn’t even think past the fact that he completely said he was not going to go up to 205 and face Jon Jones. If you’re the best – if somebody asked me to go up and fight (Michael) Bisping, I’m doing it. If you want to say you’re the best, now you’re going to go up to fight Jan? You wouldn’t do it to fight Jon?” Tyron Woodley questioned. “That makes no sense. The pay day is way different, and when someone talks and says they’re this and that, and then they get the opportunity to go against the greatest of all time and you wanted to wait two years? I don’t get it.”

“I think he should do whatever he wants to do, but don’t go around talking crap about Jon, and to Jon, and now Jon said, ‘All right, let’s go,’ and now you’re like, ‘No, I’ll get you in two years,’” Tyron Woodley said. “But one year later, Jon goes up, and now you (go) up. Everybody want to be double-belted after Conor (McGregor) did, and I get it. But Jan ain’t someone you can play with. That dude got (expletive) power, and I think it’s something about the underdog that everybody’s looking past.”

Do you agree with the comments made by Tyron Woodley seemingly suggesting that Israel Adesanya ducked Jon Jones? Share your thoughts in the comments section PENN Nation!