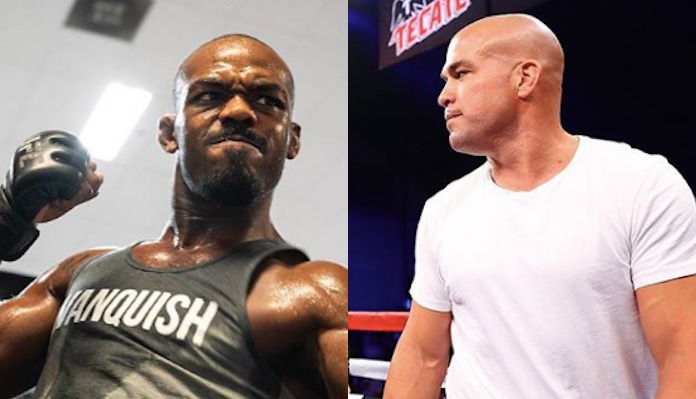 Tito Ortiz is preparing for his fight against Alberto Del Rio on Dec. 7, but he is dreaming of another bout. That is against UFC light heavyweight champion, Jon Jones.

Ortiz believes it would be a competitive fight and one that he could win.

“I think I can beat Jon Jones,” Ortiz said to TMZ Sports. “I think I have a good chance, I really do think I’ve got a good chance. If people say, ‘Oh, Tito, bulls**t, you’re over the hill,’ whatever. Come to my camp. Come train with me, come wrestle with me, come do jiu-jitsu with me. Watch my weight training. Watch my biking and stairs that I do. I push myself harder than I pushed myself through my whole career. I’m doing amazing. My mind is in the right place, my body is in the right place.”

Ortiz believes his fighting style would give Jones problems. Specifically, he says his pressure would be huge as he would make “Bones” fight his fight.

“Come on, why wouldn’t I? Pressure, pressure, pressure,” Ortiz said. “You stay in that angle, the outside reach of him, you’ve got problems with it. You can’t just sit there and play his game.”

In the primes of their careers, it would no doubt have been an interesting bout. Tito Ortiz believes Jon Jones was the best of all-time, but after the failed drug tests he tarnished his legacy.

Currently, it seems highly unlikely the two will ever fight as Ortiz is set for the first of three fights in Combate Americas. Jones, meanwhile, is set to defend his light heavyweight title against Dominick Reyes in the main event of UFC 247.

Who do you think would win between Tito Ortiz and Jon Jones if they fought right now?