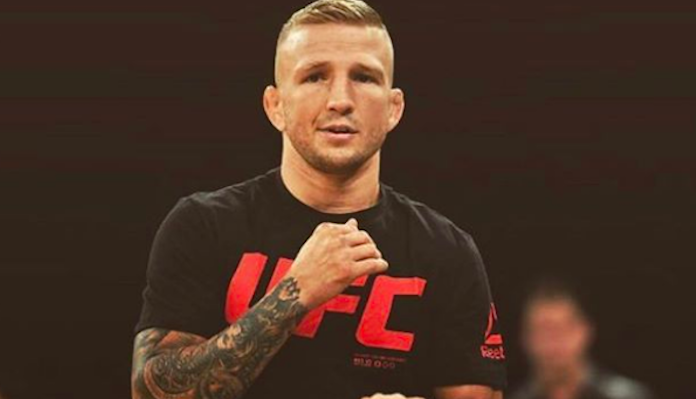 UFC bantamweight champion TJ Dillashaw has his next fight booked.

On January 26 at UFC 233, Dillashaw will look to dethrone the UFC flyweight champion Henry Cejudo. Thus giving TJ Dillashaw the chance to become the next double-champ in the UFC.

Although the fight between Dillashaw and Cejudo has been talked about for months, it was expected to take place at bantamweight. All of the sudden, the fight was at flyweight, where just days before the fight announcement, it was reported the UFC was closing the division down. On top of that flyweights were announcing that they have been cut from the UFC.

Now, the future of the flyweight division is up in the air.

However, according to TJ Dillashaw, he knows exactly why the fight is at flyweight.

“The UFC wants to get rid of the division in my eyes. They hired me to go down and close it and get another belt in the process. It’s a win-win for me,” said Dillashaw on Ariel Helwani’s MMA Show. “They paid me a f**kload of money to move down and kill the 125-pound division and collect the second belt. It is game time.”

At UFC 233, it is indeed game time for Dillashaw. He has a chance to prove just how good of a fighter he really is and become just the third UFC fighter to hold two belts simultaneously. If he does beat Cejudo, the question then becomes whether or not Dillashaw would defend both belts.

“I mean, it seems like I am going to take over,” added TJ Dillashaw. “If I am the champ in both weight classes, why even have it?”

It seems likely this could very well be the final flyweight fight in UFC history. But it seems that if the UFC does indeed get rid of the flyweight division, they could end up losing Cejudo in the process.

Ultimately, no one truly knows the exact future of the division. One thing is for sure though, it doesn’t look good for the flyweights.