Sean O’Malley believes it “makes sense” that he is fighting on the UFC 269 PPV while former champ Dominick Cruz is on the prelims.

O’Malley (14-1 MMA), is scheduled to return to the Octagon at next Saturday’s pay-per-view event for the bantamweight bout with Raulian Paiva (21-3 MMA).

The highly anticipated scrap will kickoff the UFC 269 main card, which is ultimately headlined by a lightweight title fight between Dustin Poirier and Charles Oliveira.

Also featured on the fight card is another key bantamweight bout between Pedro Munhoz and Dominick Cruz.

Despite Cruz being a former UFC Champion, promotional officials decided to put his scrap with Munhoz on the preliminary portion of the fight card.

While some old school fight fans were insulted by The Dominator’s placement on the lineup, Sean O’Malley believes it makes total sense. 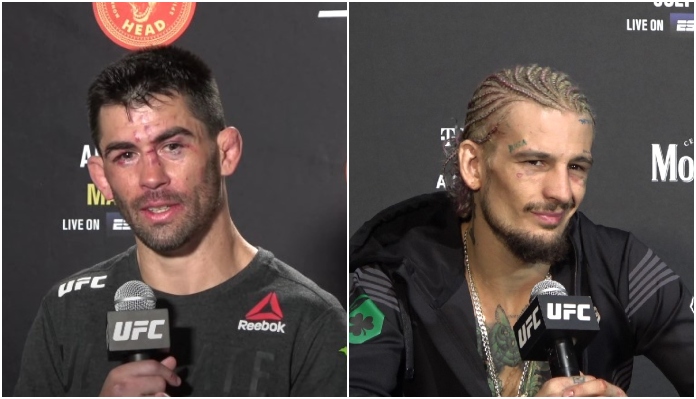 ‘Sugar’ explained his reasoning during a recent interview with MMA Fighting.

“I get a little giggle out it just because I remember Dominick Cruz saying something, trying to teach young fighters how to do promote, just something like that, how to do something,” O’Malley said on the MMA Hour. “It’s Dominick Cruz, the dude’s a legend, I can’t sit here and disrespect him, but he’s on the prelims. The UFC stacks the card in a specific way for a reason, you know what I mean?”

“If they thought Dominick Cruz and Pedro Munhoz could sell more pay-per-views than me, they’s put him on the main card. I think it’s just the UFC’s a business and they understand what they’re doing, so they’re there because they’re there.”

For O’Malley, his meteoric rise in the UFC can be attributed to one thing – his performances.

“I think it’s my performances, I really do,” Sean O’Malley said. “All the talk, all the hair, all the whatever, the face tats, all of those things are just additives, I think. My performances, you just want to watch me fight. I move different than people, I think that that’s what it really is. But I could be wrong. It could be my beautiful smile.”

What do you think of the recent comments made by Sean O’Malley? Share your thoughts in the comment section PENN Nation!