Rose Namajunas is considering a move up to flyweight and has discussed a potential fight with long time friend Vanentina Shevchenko.

In speaking with ‘MMA Fighting‘ Rose shared her thoughts on what is next for her career in the Octagon:

“Win or lose, going into the last fight, I knew I was going to take some time off. I knew I was going to at least take the summer off. I’ll say around September, I’ll know exactly what I’ll be doing. I have been training a little bit, but not super consistent. I did have this little shoulder issue that I’ve been trying to rehab, and there was this girl Isis (Verbeek) who just won her Invicta fight that came into town so I got to train with her a little bit, just some little stuff trying to stay active so I’m not on the couch completely.”

“The thing I do know for a fact — and I don’t know when exactly I might fight again — but I do know that I want to do a grappling match of some sort. I want to really rack up some experience in that department. Also, once I get my other things in order, my life stuff, I’ll be lifting lots of weights, and maybe put on a little more muscle, and just kind of see what happens from there.”

Speaking about a possible move to flyweight, Rose Namajunas said:

“I don’t know, you can do the math. I really don’t know, like I said, just one step at a time. The UFC has given me some offers for things and I just need the time to just not think about fighting at all, and then in the fall I’ll kind of lay out everything to see what makes sense.”

“Definitely I’m interested in grappling in the near future. Whoever is out there that I can challenge — and I want to get good at foot locks because that’s big now, and it’s come circle because people know how to defend them so it’s more of a complete thing again. But I kind of want to dive deep into the grappling world, then work my way back.” 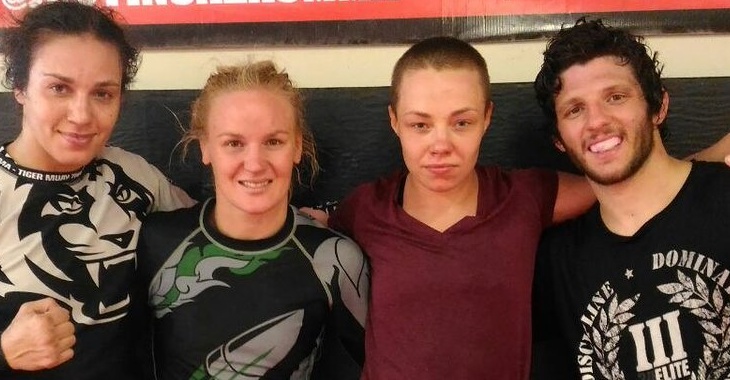 If Namajunas made a move up in weight, Valentina Shevchenko  (23-3 MMA) is the current flyweight champion. It would definitely be an opportunity of possibilities should the two meet in the cage, and Rose would be intrigued by the concept if the price is right, saying:

“I love Valentina. In my opinion, and I always forget that Amanda Nunes is the women’s GOAT of MMA, but Valentina, if she keeps doing what she’s doing, you could make that case (for her) as well. I do consider myself to be Valentina’s friend, so in order for me to do that, we would have to be set up, not for life, but it would have to be for a very good reason for me to even want to step to her.”

“She is amazing in all ways, and I have felt what she feels like in practice. I know a fight is a totally different thing, so that would be hard for me to say. Obviously, as a martial artist, that would definitely be very interesting. But, yeah, I don’t know yet. It would have to be (very lucrative). I love Valentina. I consider her to be my friend. I’ve never had a problem with being cordial with people I’m going to fight. I’ve maintained friendships with people that I’ve fought, but I’ve never had an issue with fighting a teammate or anything like that. I have started to think a little bit differently about fighting at this point in my life.”

“It would be difficult with the emotions and things like that, and I feel like I’m a different person right now. I would have to think about it.”

Would you like to see a Namajunas vs Shevchenko match-up?

This article appeared first on BJPENN.COM
- Advertisement -
Previous articleDevin Clark expects to “break” Azamat Murzakanov at UFC San Diego: “Every person can be broken so it will come”
Next articleHenry Cejudo explains why he thinks Alex Pereira KO’s Israel Adesanya at UFC 281: “There are a couple of things that Israel does wrong”