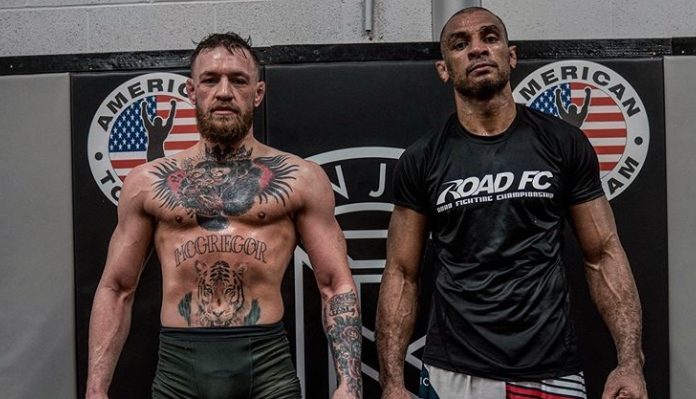 While in town for the Super Bowl this past Sunday, former UFC lightweight and featherweight champion Conor McGregor paid a visit to American Top Team’s Atlanta, Georgia facility.

When there, he took advantage of the time by training with BJJ black belt and former UFC middleweight/welterweight, Roan ‘Jucao’ Carneiro.

After McGregor posted a picture of himself and Carneiro on Instagram together at ATT, the speculation as to whether McGregor was leaving his longtime home of SBG Ireland began for the MMA community.

Carneiro would recently explain that this wasn’t the case, however, as the two got in contact through their mutual friend in top MMA nutritionist, George Lockhart.

“[Conor] was like ‘hey man, you want to roll?’ I said, ‘of course man, why not?’” Carneiro told The Body Lock. “Then we do one roll, five minutes and then the second roll, another five. And then the third, I have to be honest, it was my first training [session] after my [last] fight so I gassed a little bit. He’s like, ‘come on man, let’s go, one more, one more,’

“Then he wanted championship rounds, so then we rolled for five five-minute rounds. He liked it a lot. We exchanged experience, I showed him some tricks. [I] just left my door open for him, whenever he wants to come, he is going to be welcomed. He changed what I thought about him — super nice guy, so respectful, I only have good things to tell about him.”

Being as large of a superstar that McGregor has become, rumors of all sorts are always going to find their ways around him.

Carneiro found that out first hand.

“I saw he posted a picture on his social media,” Carneiro said. “I’m like, ‘wow,’ My Instagram, all social media, Twitter… Everything went crazy. [We’re] talking about calls, people were calling me. Then the rumors. ‘Oh, he’s going to be the next head coach,’ This is fake news. He might like the training, I’m sure he liked it, but we didn’t have any conversations about me being his trainer.

“He might [return] in the future, I leave the door open. If he wants my help, I definitely want to help him. To be honest, it will be an accomplishment if I’m able to make him beat the guy who beat him. That makes me go, ‘wow,’

For the 40-year old Carneiro, his last fight came on January 28 at ACB 91 when he suffered a split decision loss to Husein Kushagov.

McGregor, on the other hand, will be eligible to return to action in April.