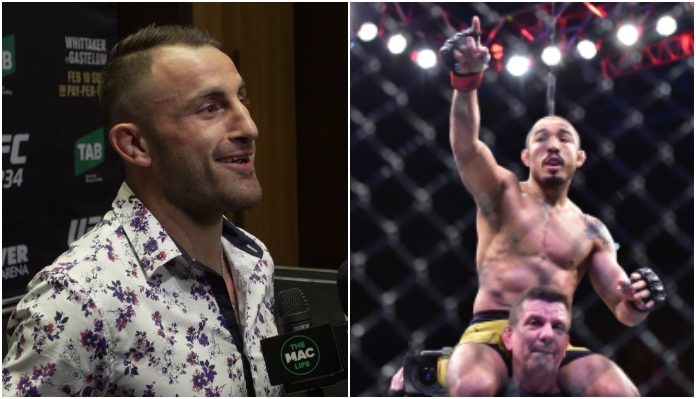 After yet another incredible victory, the former featherweight king and all-time great Jose Aldo is once again making serious waves within his division.

Wrongfully counted out in his last two outings against rising contenders, Aldo showed them both why he’s the legend that he is and still has plenty left in the tank.

However, with his retirement firmly planned out, it begs the question of who will be Aldo’s final dance partners? Aldo’s longtime coach and manager Andre Pederneiras recently shared ideal opponent and why.

“We want him to fight Alexander Volkanovski, the guy who knocked out Chad Mendes, the guy who is the best ranked,” Pederneiras said when speaking on Confraria da Porrada. “In fact, it is the following: we have a dream to dispute the title, which is difficult. So we have the dream of our last fight to get there.

“There are only two possibilities. Max Holloway moves up in weight and leaves the belt vacant, and Aldo would be the postulate to the title, even for the history that he has and for being the first of the ranking, or to eliminate all the contenders. The Moicano fight was the first contender, in our head, and the second would be Alexander Volkanovski, who is the fourth-ranked now. Or Frankie Edgar, I don’t believe they give him the title shot while having lost to Aldo. So the guy in our head who would be the next title challenger would be Alexander now. We’re talking,”

As for one possible opponent in particular, with Aldo’s continued brilliance on display, it has gotten the public somewhat talking about a rematch with Conor McGregor. Especially after McGregor saying he would like to fight in Brazil.

As nice as it might be for Aldo to get a shot at redemption, Pederneiras sees no reason for McGregor to be interested in it.

“Conor even started some business on his Twitter, saying that he wanted to fight here in Brazil, suggesting that he would do this fight with Aldo,” Pederneiras said. “But I do not see it happening. For him, it will be marked for the rest of his life, not worth the risk. What can he do better than 13 seconds? Anything. If he makes a fight and if he knocked Aldo out in 14 seconds, it would be worse than the first, which he won in 13. So it’s a fight that he does not have any interest in.”

In the end, Volkanovski is, of course, open to fighting either Aldo or the champion Max Holloway next.