Israel Adesanya will run things back with Marvin Vettori in the main event of UFC 263 on June 12.

After Robert Whittaker defeated Kelvin Gastelum on April 17, many expected the former middleweight champ to get the next title shot. However, June was reportedly too quick of a turnaround for him so the promotion decided to book Adesanya vs. Vettori 2, according to Combate.

It shouldn’t be a surprise to see the rematch get booked as just recently White said Vettori would be next for Adesanya. They also have bad blood as the Italian has been vocal about wanting the rematch. 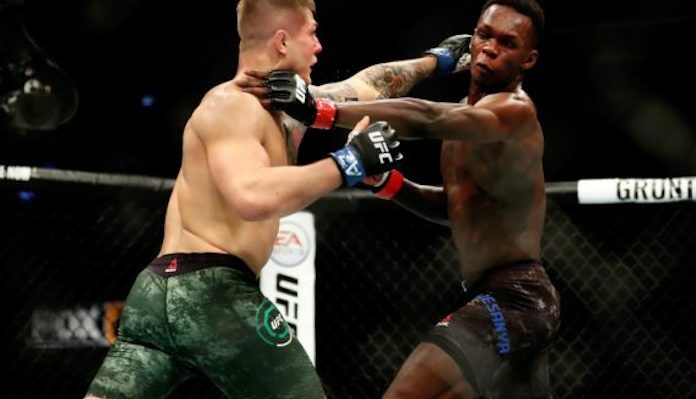 “I absolutely want that fight again, absolutely. It is unbelievable myself a year ago in that fight, what I was able to accomplish against him,” Marvin Vettori said to BJPENN.com back in late 2019 about Israel Adesanya. “I have gotten miles better. He has had his journey and is still having it and I have to work my way up to where he is. I’m not looking backward, and I now have to start a new journey and am ready to climb to the top.

“But, yes I plan on winning until I get that fight and it will go much differently than the first one. This time I won’t leave it to the judges as I will finish him,” Vettori continued about Adesanya. “But, if somehow, someway he makes it the scorecards it will be total domination and very clear who wins that fight and it will be me getting my hand raised. I’m very, very confident I beat him. I know I can beat him and should have beaten him the first time.”

Israel Adesanya is coming off a decision loss to Jan Blachowicz at UFC 259 for the light heavyweight title. It was his first career loss in MMA as before that, he scored a TKO win over Paulo Costa and a decision win over Yoel Romero to defend his belt.

Marvin Vettori, meanwhile, is coming off a one-sided beatdown over Kevin Holland at UFC on ABC 2. Prior to that, he beat Jack Hermansson by decision in December.

Adesanya vs. Vettori will headline the pay-per-view card at a location TBD. The flyweight title rematch between Deiveson Figueiredo and Brandon Moreno will also be on the June 12 card.

Who are you picking to win the UFC 263 main event between Israel Adesanya and Marvin Vettori?

This article appeared first on BJPENN.COM
Previous articleTyron Woodley removed from UFC rankings
Next articleJon Jones responds after Dana White claims he wants $30 million to fight Francis Ngannou: “Is someone speaking with you on my behalf or…”
© Newspaper WordPress Theme by TagDiv