Tyron Woodley was removed from the UFC rankings, likely signaling the end of his time in the promotion.

Just recently, the UFC removed Junior dos Santos and Alistair Overeem from the rankings, and shortly after it was confirmed they were released from the promotion. The same could be happening here to Woodley as he is not available on the fan rankings, or listed on the UFC roster on their website.

Woodley fought out his UFC contract at UFC 260 where he suffered a first-round submission to Vicente Luque. It was his fourth loss in a row after suffering a TKO loss to Colby Covington, and decision losses to Gilbert Burns and Kamaru Usman to lose his belt. After his setback to Luque, UFC president, Dana White said that was likely it for Woodley in the promotion.

“‘Fight of the Night.’ They came to fight. Obviously, Luque, a rising star, a kid on the up, and Woodley, who takes a lot of criticism. That kid came to fight tonight and he went out on his shield tonight, man. He came to fight,” White said after UFC 260. “Listen, how old’s Tyron now? 39? That’s four in a row. Yeah.” 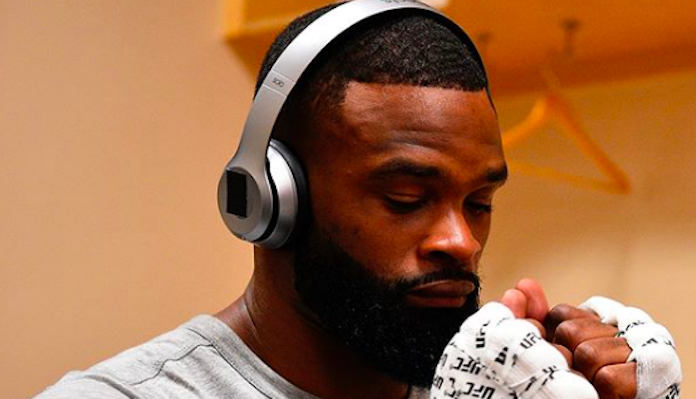 If this is the end of Tyron Woodley in the UFC, he had a phenomenal career. The former welterweight champ defended/retained his belt four times. He also holds notable wins over Stephen Thompson, Darren Till, Demian Maia, Robbie Lawler, and Carlos Condit among others. In the UFC, Woodley went 9-6-1 and is one of the best welterweights in the history of the promotion.

With Woodley likely no longer a member of the UFC, where he goes next is uncertain. He could decide to retire, to reunite with Scott Coker in Bellator, or decide to box. Regardless, Woodley is still a big name in the sport and had a great run in the UFC.

What do you make of Tyron Woodley being removed from the UFC rankings?