White was a recent guest on the Bill Simmons podcast where he confirmed that the UFC is currently targeting a Ngannou vs. Lewis rematch, this because ‘Bones’ wanted $30 million to fight the promotions reigning heavyweight champion.

“We tried to work with Jon, and we eventually have to move on because realistically, and in all honesty, Derrick Lewis is the guy who deserves the fight. Derrick Lewis is a heavyweight, he beat Francis Ngannou, he’s looked good in his last couple of fights, he’s ranked in the top three, I think, and he deserves the fight. That’s the fight that should happen. We’ll just roll and do what we do. When Jon’s ready, he’ll let us know,” White said (h/t MMAjunkie.com). 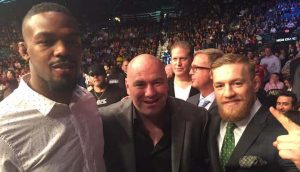 “In (Jon Jones) deal, he’s talking he wants $30 million guaranteed. The way that this works is, these guys all share in the pay-per-view. He will share in the profits of the fight. That’s how it works. That’s how you run a business, and you don’t go broke.”

Jones (26-1 MMA) responded to White’s comments earlier this evening, where he denied ever asking for a $30 million dollar purse.

I never discussed wanting 30 million with you or Hunter @danawhite just wondering where you heard that number? Is someone speaking with you on my behalf or…

“I never discussed wanting 30 million with you or Hunter. Dana White just wondering where you heard that number? Is someone speaking with you on my behalf or…” – Jones wrote on Twitter.

Jon Jones has not competed inside of the Octagon since UFC 247 in February of 2020, where he successfully defended his light heavyweight title with a unanimous decision victory over Dominick Reyes.

‘Bones’ has since vacated that promotions 205-pound title in hopes of making a run at heavyweight gold.

How much do you think the UFC should pay Jon Jones to fight Francis Ngannou?