It was announced yesterday that at UFC 251, Usman will be defending his UFC Welterweight Championship against Burns in the inaugural pay-per-view event on the highly anticipated Fight Island.

Nate Diaz then issued a scathing response to the fight being booked, which was followed up by RDA giving his own thoughts – with the latter later deleting his tweets.

This is what’s wrong with people claiming they’re fighters settling for less cause they know they’re not worth shit you should’ve fought the next guy in line not the guy who would take less cause he’s told too that’s why no one will remember youguys
This isn’t a title fight pic.twitter.com/7GLJUJA45C

I get paid more than both of you together 😎
+ FUCK REEBOK

“This is what’s wrong with people claiming they’re fighters settling for less cause they know they’re not worth shit,” Diaz wrote.”You should’ve fought the next guy in line, not the guy who would take less cause he’s told too. That’s why no one will remember you guys. This isn’t a title fight.”

“I get paid more than both of you together + F*** REEBOK,” Diaz added. 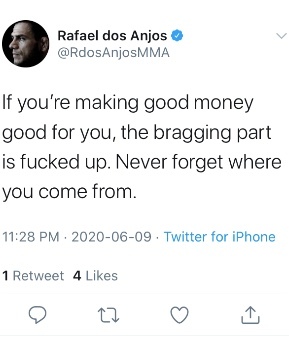 “If you’re making good money good for you, the bragging part is f***ed up,” dos Anjos responded. “Never forget where you come from”.

Nate Diaz and Rafael os Anjos have crossed paths before, competing against one another back at a UFC on FOX event in December 2014. On that occasion, RDA was the clear victor in a dominant unanimous decision win — and just one fight later, he beat Anthony Pettis to win the UFC Lightweight Championship.

Both men are no strangers to fluctuating between lightweight and welterweight, but at this stage in their respective careers, it certainly feels as if their days in the title picture have come and gone. Still, you can never say never in this game, and a rematch between dos Anjos and Diaz to determine who flies up the rankings—likely at welterweight—would be an intriguing proposition.

In terms of the Usman vs. Burns fight, it seems to be well documented now that the Brazilian was not the first man to be offered the title shot. Ariel Helwani had reported that the UFC tried to make it happen with Jorge Masvidal but failed, before Leon Edwards confirmed that he had also been offered the chance to challenge “The Nigerian Nightmare”.

The division is incredibly hot right now and regardless of who ends up as champion once the dust settles on Usman vs Burns, there are going to be plenty of challengers just waiting in line to make an impact.

What do you think of this deleted Tweet from Rafael dos Anjos?