Rafael Dos Anjos has fired back at Conor McGregor for suggesting he is not worthy of the BMF Title.

It was after Jorge Masvidal allegedly sucker punched Colby Covington outside a restaurant in Miami, that Dos Anjos claimed the BMF belt should be stripped from ‘Gamebred‘ and given to him, as he believes he is the true BMF of the UFC.

You’re either a BMF or you’re a sucker puncher.
Can’t be both. @danawhite time to hand that belt to me.

“You’re either a BMF or you’re a sucker puncher. Can’t be both @danawhite time to hand that belt to me.”

Conor McGregor has taken issue with that tweet, responding to ‘RDA’ via social media:

“Pulled out with a sore toe in what would have been the biggest fight of your bloodline’s existence. Past, present, and future. You are never eligible.” 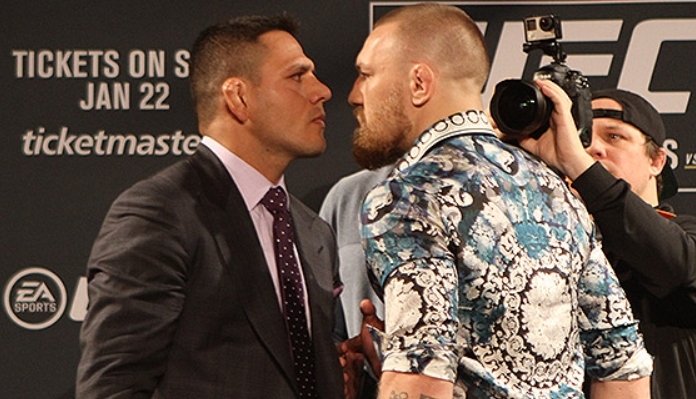 McGregor was referring to Dos Anjos pulling out of their UFC 196 bout – way back in 2016 – due to injury.

‘RDA’ weighing in on McGregor saying he would ‘never be eligible’ for the BMF belt tweeted:

Of course the BFM belt came about after UFC 241 where Nate Diaz proclaimed himself the “baddest motherf**ker in the game” after defeating Anthony Pettis. Following that win Diaz proceeded to issue a callout to Masvidal. When the Diaz vs Masvidal fight was announced, Dana White proclaimed there would be a celebratory BMF belt and it would be awarded to the winner. In November of 2019 at UFC 244, Masvidal did in fact defeat Diaz and claimed the BMF belt. It has stayed with Masvidal to date.

What are your thoughts on McGregor weighing in on Dos Anjos request that the BMF belt be given to him in light of Masvidal’s latest ‘out of the cage’ attack on Covington?

This article appeared first on BJPENN.COM
Previous articleDin Thomas perplexed by the sympathy MMA Twitter has shown Colby Covington: “You would have thought Jorge Masvidal ran up on Stephen Thompson”
Next articleDarren Till proclaims “future champion” Tom Aspinall would beat Jon Jones: “He would play with him”
© Newspaper WordPress Theme by TagDiv