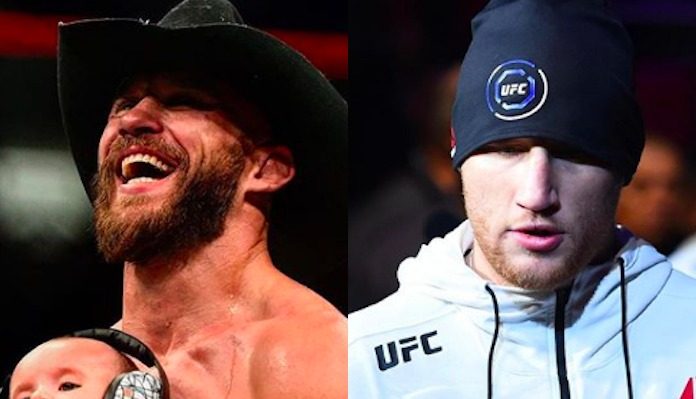 Donald Cerrone (36-12 MMA) entered tonight’s main event looking to rebound, this after suffering a second round TKO loss to Tony Ferguson in his most recent effort at June’s UFC 238 event.

Prior to the setback, “Cowboy” was riding a three fight streak which included stoppage victories over Alexander Hernandez and Mike Perry.

Meanwhile, Justin Gaethje (20-2 MMA) entered UFC Vancouver on a two-fight win streak. In his most previous Octagon appearance at UFC Philadelphia, “The Highlight” scored a first round knockout victory over Edson Barboza.

Tonight’s UFC Vancouver main event lived up to expectations as Justin Gaethje and Donald Cerrone immediately went to war from the opening bell. Unfortunately for fans of ‘Cowboy’, Gaethje’s aggression and power ultimately proved to be to much as he won via first round TKO after landing some nasty hooks.

Check out how the pros reacted to tonight’s Justin Gaethje vs. Donald Cerrone fight below:

Mannn new patient Gaethje is a nightmare for everyone!!

He can take a ridiculous amount of punishment. Cardio for days. Beats up your leg with brutal kicks which forces you to close the range where he has hands of stone that you have to watch out for.

Love that after a fight!

Those quick turnarounds have to play some type of factor when fighting at the highest level in the world! #TheWeeklyScraps #UFCVancouver!

I'll give him his rematch. If they want. https://t.co/T7VD6I2fzb

@Justin_Gaethje almost pulled out during fight week with a horrible eye infection. He said I’d rather die than pull out.

Who would you like to see Justin Gaethje fight next following his TKO victory over Donald Cerrone at tonight’s UFC Vancouver event? Sound off in the comments section PENN Nation!