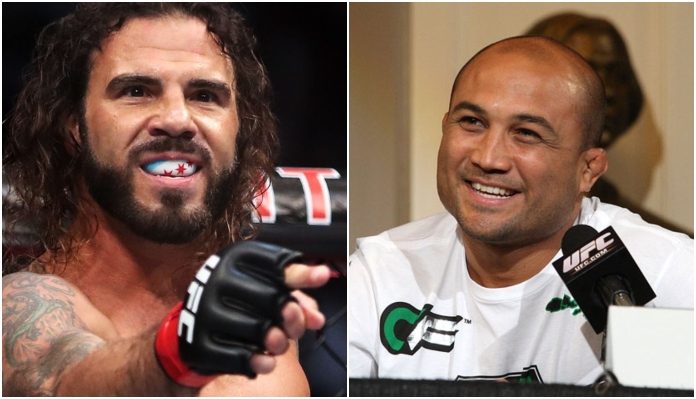 Penn (16-13-2 MMA) was returning for the first time since  December’s UFC 232 event in Los Angeles, where he suffered the first submission loss of his career to Ryan Hall.

‘The Prodigy’ entered tonight’s contest looking to pick up his fist win since November of 2010, when he knocked out Matt Hughes in the pairs trilogy bout at UFC 123.

Meanwhile, Clay Guida (34-18 MMA) stepped foot in the octagon for the first time in eleven months this evening m. ‘The Carpenter’ suffered a submission loss to Charles Oliveira in his most recent effort at UFC 225. Prior to the setback, Guida had picked up wins over Joe Lauzon and Erik Koch respectively.

BJ Penn was able to find success in the opening round of the fight, finding a home for his jab on frequent occasion. Guida would utilize some hard leg kicks to turn the tide in round two, and eventually scored a late takedown. In the third and final round Penn would show is toughness by standing and trading with ‘The Carpenter’, but Guida ultimately landed the better volume of strikes in the final five minutes.

Clay Guida was awarded a unanimous decision victory over BJ Penn by the judges in attendance (29-28 x2, 29-27).

Check out how the pros reacted to Guida vs Penn below:

Penn is showing good speed and timing he can still box!#UFC237

Bj has that laser jab going , he does look a lot better in this fight compared to others of recent #UFCBrazil

Penn is looking, dare I say it, "motivated!" #ufc237 pic.twitter.com/lzuGaGk1sA

Watching Guida’s hair cover BJ’s face and slowly creep closer to his mouth as he inhaled was giving me crazy anxiety. #UFC237

“He has got nothing to lose either,” Conor McGregor replied to Danis. “Soldier on soldier! Zero concussive KOs on record. Some repetitive blows yes. But zero lights out. There are fighters with way worse on the clock, way more mental issues, and are paraded to continue. People in this game are fools. Blind sheep.”

With the win, Guida is now 3-1 over his past four octagon appearances.

In defeat, Penn’s losing streak extends to seven fights in a row.

What was your reaction to tonight’s Clay Guida vs BJ Penn fight at UFC 237? Sound off in the comments section Penn Nation!