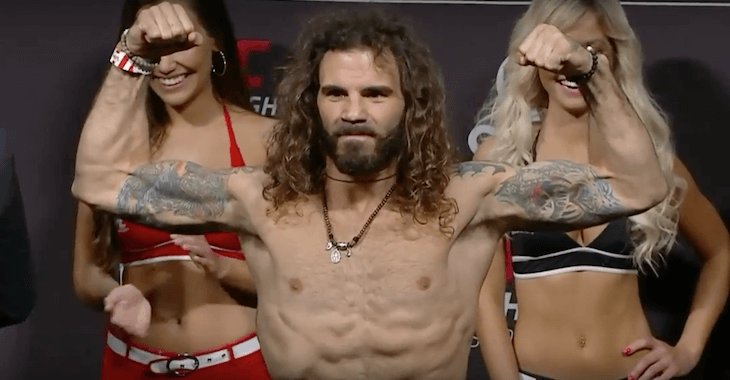 Penn (16-13-2 MMA) was last seen in action at December’s UFC 232 event in Los Angeles, where he suffered the first submission loss of his career to the always crafty Ryan Hall.

‘The Prodigy’ enters tonight’s contest looking to pick up his fist win since November of 2010, wh
en he knocked out Matt Hughes in the pairs trilogy bout at UFC 123.

Meanwhile, Clay Guida (34-18 MMA) will return to the octagon for this first time eleven months. ‘The Carpenter’ suffered a submission loss to Charles Oliveira in his most recent effort at UFC 225. Prior to the setback, Guida had picked up wins over Joe Lauzon and Erik Koch respectively.

Round three begins and both men land jabs early. Guida with a combination. He lands a low kick and charges in with an uppercut. Guida lands a big right hand. BJ is backing up. Guida with a low kick and then a jab. He is really turning the tide in his favor now. The fighters clinch against the cage. Clay with an elbow. BJ with a short right hook. Guida breaks and lands a combination. Clay Guida continues to force the pressure on BJ. He drops down and looks for a takedown. Penn with a jab but Guida answers with a right hand that drops the former champion. BJ Penn scrambles right back up to his feet and the fighters clinch. Two minutes remain. BJ with a knee. Guida breaks free from the clinch and lands a right. BJ Penn returns fire with an uppercut. Guida shoots for a takedown. Penn with a knee. Guida replies with a flurry. Both men are throwing heavy shot from the clinch. BJ lands an uppercut. Guida with a left. Another uppercut from Penn. Guida shoots back in and the fighters clinch. Penn breaks free and lands a right hand. Penn with another right. He is pressing the action. Guida with a right hand. BJ lands a jab and then an uppercut. Guida with a high kick. Penn with a jab to the body. The horn sounds to end round three.