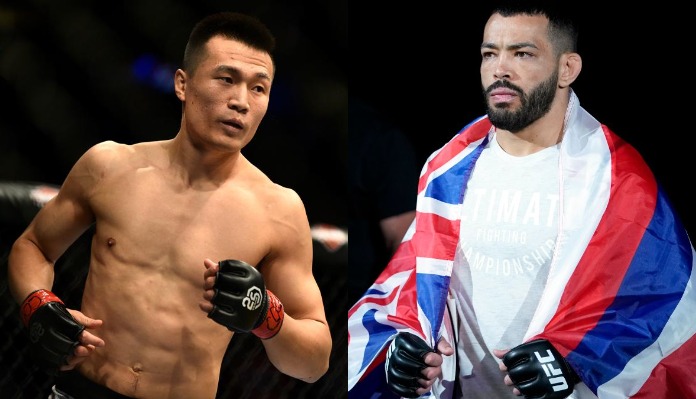 Chan Sung Jung (17-6 MMA), aka The Korean Zombie, had entered tonight’s contest looking to rebound from his unanimous decision loss to Brian Ortega last October. Prior to that setback, ‘TKZ’ had earned back-to-back first round TKO victories over Renato Moicano and Frankie Edgar.

Meanwhile, Dan Ige (15-4 MMA) entered UFC Vegas 29 looking to build off the momentum of his stunning knockout of Gavin Tucker from back in March. The Hawaiian standout had won 7 of his past 8 bouts, with his lone loss in that time coming against Calvin Kattar, ahead of Saturday’s event.

Tonight’s UFC Vegas 29 headliner proved to be a thrilling twenty-five minute affair. ‘TKZ’ was able to get the better of the Hawaiian in the early rounds, even dropping Ige with a right hand in round two. However, Dan showcased his toughness and wound up storming back to win round four.

Heading into the fifth and final round most fans and analysts had the contest scored either 2-2 or 3-1 for The Korean Zombie. The final five minutes was full of action, but after a blistering start to the round, Dan Ige ultimately wound up being outpointed by his Korean counterpart. After five rounds of action, ‘TKZ’ was awarded the unanimous decision win.

Check out how the pros reacted to Zombie fighting Ige below:

You can’t help but always love this song! #UFCVegas29

This gonna be fire, but Ige will get this done in 2R#UFCVegas29

I wish going to sleep meant I could plug in my body and my mind could play warzone all night.

Who would you like to see The Korean Zombie fight next following his decision victory over Dan Ige at UFC Vegas 29? Share your thoughts in the comment section PENN Nation!