Dern (11-2 MMA) had entered tonight’s main event sporting a four-fight winning streak, her latest being a first round submission victory over Nina Nunes back in April.

Meanwhile, Marina Rodriguez (15-1-2 MMA) was coming off of back-to-back wins, her most previous being a decision victory over Michelle Waterson in May. 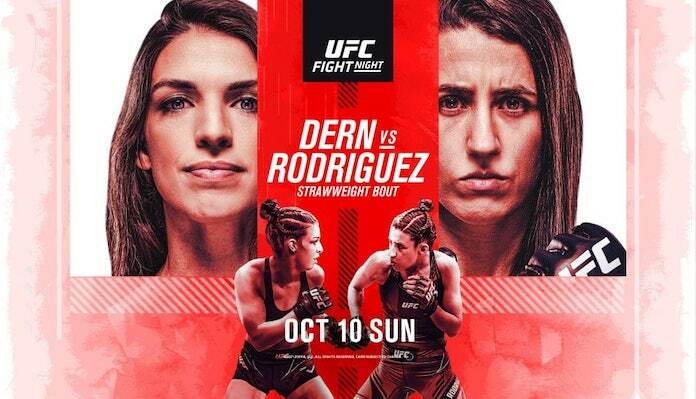 Tonight’s UFC Vegas 39 main event proved to be a classic strikes versus grappler matchup. Marina Rodriguez was able to simply outclass Mackenzie Dern while on the feet, but the jiu-jitsu wizard nearly finished the fight in round three thanks to her submission game. Despite her best efforts Dern could not overcome the striking prowess of Rodriguez and wound up losing the five-round contest on points.

Check out how the pros reacted to Dern vs. Rodriguez below:

Oofff this girl ain’t having none of it #UFCVegas39

That arm was about to go home with Dern! Run grappling exchanges and big GnP! 1-1 going into the 3rd for me. #UFCVegas39

Those transitions! Leg attack to sweep to crucifix to mount. High level! #UFCVegas39

Good Lord Dern is magic on the ground. That transition to the back mount was insane #UFCVegas39

Rodriguez is really good in the forward blitz’s.

— Below the Belt with Brendan Schaub (@btbshowtime) October 9, 2021

Some feints would’ve done Dern well in this fight. Too much chasing and predictable attacks for Rodriguez to read and cut angles out of danger. Fun fight still. Both ladies showed some serious threats in both their worlds of experience #UFCVegas39

I gotta see marina vs Joanna at some point

Who would you like to see Marina Rodriguez fight next following her decision victory over Mackenzie Dern at tonight’s UFC Vegas 39 event? Share your thoughts in the comment section PENN Nation!