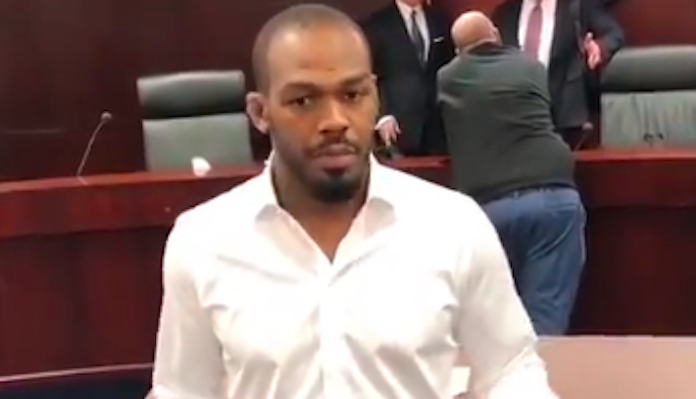 The police audio from Jon Jones’ arrest has been released.

According to the audio, Jones’ longtime fiancee Jessie Moses refused to go back to the hotel room where the longtime UFC champ allegedly assaulted her. She did not want to go to the room to get her stuff, the audio revealed.

“He’s actually a professional MMA fighter, Jonathan Jones, and she’s, like, refusing to go back to the room,” the security officer said in audio obtained by MMA Fighting. “We’re trying to assist her to help her grab her stuff, and she just will not go back.”

Moses was on the casino floor barefoot when she went to a security officer who made the call. She was moved to the security office away for protection while police arrested Jon Jones on the crosswalk of The Mirage casino and allegedly smashed his head onto the front hood of a police car after he became “irate,” the police report said.

“She stated she was in her bed of the hotel room when Jonathan returned after being out drinking with his friends,” wrote LVMPD detective T. Byrd in the arrest report of Jones said. “She said he was aggressive but not violent with her. She would not go into detail about the aggressive behavior but said she did not feel safe in the room with him. She grabbed her three daughters and left the room. Prior to getting her daughters, Jonathan grabbed her by the back of her hair and pulled her back toward the room.

“She said she didn’t feel like he was keeping her from leaving but said he didn’t want her to leave. She then got away from him, grabbed the kids, and left the room. She took us to the bedroom where she said the altercation took place,” the report contninued about Jones. “There was blood on the bedsheets, as well as shoes strewn about. There were two fresh tissues on the floor. … As Detectives were leaving, Jessie asked ‘so how long do I have until he is out?’ She still seemed very scared as to the release of Jonathan from jail.”

According to the report, Moses had blood all over her clothing and dried up blood on her lower lip, she denied Jones hit her and said her lips were dry. However, when asked if she was okay and if she wanted to go back to the hotel room, she reportedly teared up and later said she was afraid to return. Following that, police found cause to arrest Jones.

Jon Jones has since posted bond and is awaiting his court appearance.