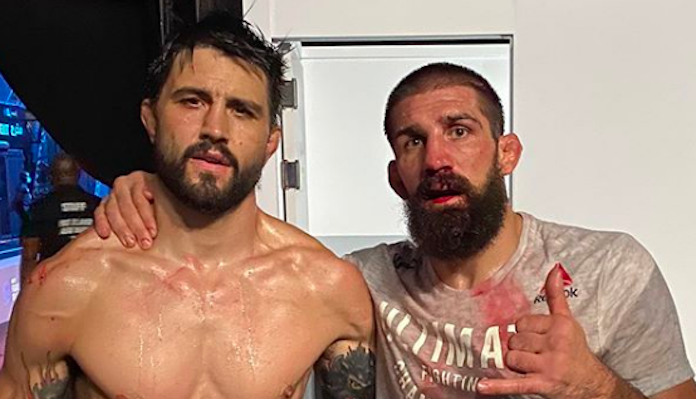 After slugging it out at UFC Fight Island 4 on Saturday, Carlos Condit and Court McGee linked up to have a meal together post-fight.

Condit and McGee met on the undercard of UFC Fight Island 4, which went down on Yas Island in Abu Dhabi. The pair fought for the allotted 15 minutes, with Condit ultimately earning a unanimous decision victory.

After the fight, which left McGee with a badly broken nose, the pair met up to pose for a photo, and later, to share a meal together before heading back to the United States.

See the highlights of the time they spent together post-fight below:

It was an honor to share the cage with you @carloscondit 🙏🏽 . . #ufcfightisland #abudhabi #ufc #respect

#Repost @courtmcgeemma • • • • • • Yas Island It was an honor to share the cage with you @carloscondit 🙏🏽 Likewise my friend. Much respect . . #ufcfightisland #abudhabi #ufc #respect

To say Carlos Condit needed a win at UFC Fight Island 4 would be an understatement. The former interim welterweight champion had not tasted victory since 2015, when he defeated Thiago Alves by TKO. That win was preceded by a string of losses to Robbie Lawler, Demian Maia, Neil Magny, Alex Oliveira, and most recently, Michael Chiesa.

Court McGee, on the other hand, now finds himself on a similar skid, having lost his last three fights to Condit, Sean Brady and Dhiego Lima.

What do you think should come next for these two welterweight veterans after UFC Fight Island 4?