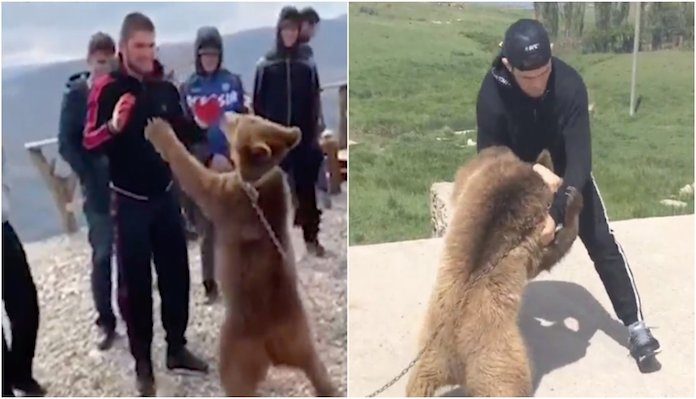 The People for the Ethical Treatment of Animals (PETA) have come after UFC lightweight champion Khabib Nurmagomedov after old videos of him wrestling bears recently resurfaced.

Videos of Nurmagomedov wrestling bears as a child have been known in the MMA community for years, however with the champ recently becoming a global star after headlining UFC 242 in Abu Dhabi, the mainstream media has now become aware of them.

At 9, UFC star Khabib Nurmagomedov’s dad, an army veteran and former judo and sambo champion, put him through a tough training regime that included wrestling a wild bear. pic.twitter.com/dFKHq1blKL

PETA UK Director Elisa Allen spoke to Business Insider and criticized Nurmagomedov for wrestling bears, and also called on the UFC to evaluate its relationship with him. Check out what PETA had to say about Nurmagomedov below (h/t Karim Zidan of BloodyElbow.com).

“PETA encourages the UFC to evaluate its relationship with Mr. Nurmagomedov until he shows a clear change in attitude and a commitment to showing animals the respect that they deserve. Wrestling with a chained bear is loathsome behavior that shows an utter lack of respect for and consideration of who these animals are. In the wild, bears roam across vast territories, foraging, swimming, digging in the dirt, climbing trees, searching for a mate, and expressing other essential, natural types of behavior. Those used in Russia for ‘boxing,’ ‘dancing,’ or other archaic forms of entertainment are typically torn from their mothers as cubs, chained, caged, muzzled, beaten, and deprived of everything that’s meaningful to them. PETA urges Mr. Nurmagomedov to stick to wrestling with willing human opponents.”

Nurmagomedov recently defeated Dustin Poirier to defend the UFC lightweight championship in the main event of UFC 242. He is now expected to defend his title next against No. 1 contender Tony Ferguson, though fights against Justin Gaethje and Conor McGregor are possibilities as well if the Ferguson fight can’t get done. Not to mention a possible superfight against the legend Georges St-Pierre.

Do you agree with PETA’s criticisms of Khabib Nurmagomedov?