Paul Felder will be back in the Octagon to face rising contender, Dan Hooker in his opponent’s home turf of Auckland. The lightweight fighters will collide in the main event of the February 2020 showdown. Their intense staring contest last week was enough to get fans hyped for the upcoming event, and Paul Felder confirmed that the tension was completely real:

Felder said (via MMA Junkie): “As far as intensity, that was real. I went down to New Zealand expecting a little bit of that from Dan because of how we interacted on social media. We kind of went back-to-forth a little bit. But that’s what it’s all about.

“We’re two guys that are trying to rally for a title shot after this one. We’re in each other’s way. That’s how it should be. That’s how it’s supposed to be when you’ve got a five-round main event with a guy.

“I’m invading into his country. My whole plan is to knock his ass out in front of all his friends and family. And take that money and get out of there and go on to a title shot.” 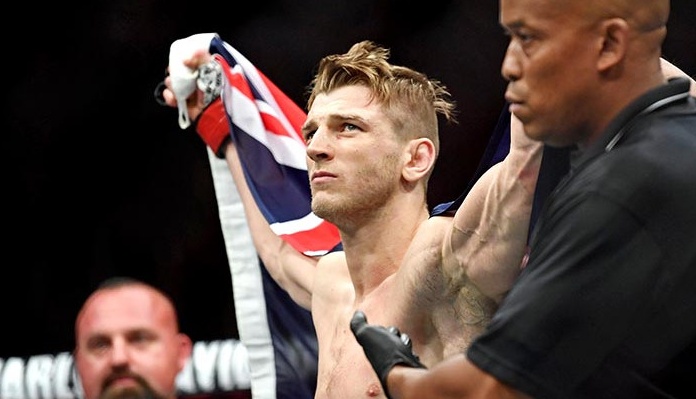 Felder is ranked at number 6 in the lightweight division, one position above Dan Hooker. However, Hooker is riding high after dominant back-to-back performances against James Vick and Al Iaquinta. Despite the lower ranking, Felder believes the “killing streak” of Hooker gives merit to their matchup:

“I either wanted a really high ranked opponent or I wanted the main event. I made that really clear to my manager, to Sean Shelby, to Dana White that, look, this is what I want. For some reason, it seemed Dana was a little reluctant to give me that shot. To kind of give me that chance to step in there. I don’t know what it is about my style that is any question you wouldn’t want to have in a five-round fight.

“They finally trusted me, they gave me that opportunity and they gave me that shot. That’s what I want. I didn’t care that Dan’s the one ranked behind me, that stuff doesn’t matter. He’s been on an absolute killing streak right now. So if I take him out, that just sets me up for one more fight potentially until fighting for the belt.”

Who are you picking to emerge victorious when Paul Felder and Dan Hooker square off in the UFC Auckland main event? Sound off in the comments section PENN Nation!