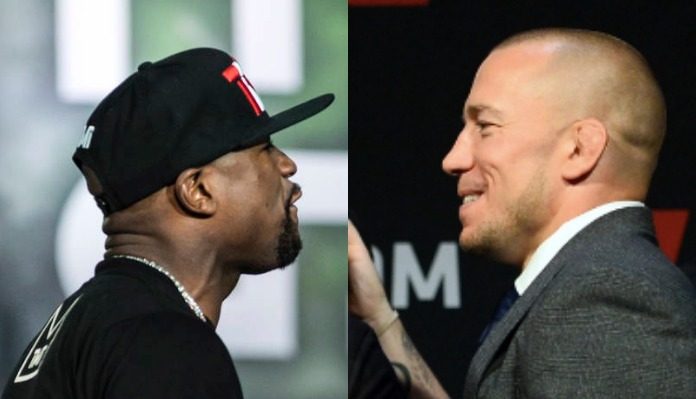 The odds have been revealed for boxing legend Floyd Mayweather’s next opponent and in what promotion the fight would take place in.

The online sportsbook BetOnline revealed the odds for the next possible opponent for Mayweather, as well as what promotion the fight would take place in.

Check the odds out below, courtesy of a tweet by TSN’s Aaron Bronsteter.

In an Instagram post late Thursday night, Mayweather said that he will be coming out of retirement in 2020, and his post was later reposted by UFC president Dana White. Speculation has already begun that Mayweather and White have made some sort of deal for Mayweather to be involved in White’s Zuffa Boxing venture, but so far those are just rumors.

The rumors were fueled by photos of Mayweather and White sitting court-side at an L.A. Clippers vs. Boston Celtics NBA game earlier this year.

At this point, Mayweather’s return is just rumors, but the sportsbooks are obviously jumping all over it as they clearly want a piece of the action. Mayweather has not competed in a pro boxing match since he knocked out UFC superstar Conor McGregor in a true superfight in August 2017. That was the last fight of his legendary boxing career and took his overall career record to 50-0, though he did compete in an exhibition match in 2018. Mayweather is currently 42 years old and turns 43 next February.

If Mayweather does return to competition, boxing seems far more likely than mixed martial arts considering he has no experience grappling. But that hasn’t stopped the sportsbooks from revealing the odds to several potential Mayweather MMA fights, including a superfight against UFC legend Georges St. Pierre.

What do you think Floyd Mayweather’s next move will be?