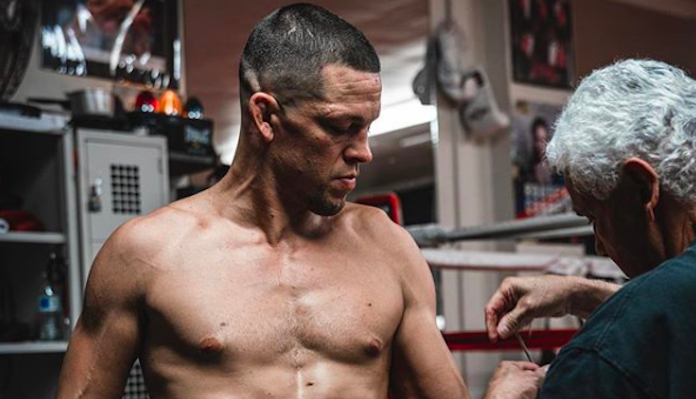 Nate Diaz will no longer be fighting Leon Edwards in the co-main event of UFC 262 on May 15 in Houston, Texas.

Unfortunately for fight fans, ESPN reported this evening that Diaz (20-12 MMA) has suffered a minor injury and his highly anticipated welterweight showdown with ‘Rocky’ has been postponed until June’s UFC 263 pay-per-view event.

No details were released regarding the injury suffered by Nate Diaz, but clearly it is nothing too serious as the bout was rescheduled to take place just weeks after the original date.

Leon Edwards (18-3 MMA) has gone unbeaten in his past nine fights, although his most recent bout with Belal Muhammad ended in a no-contest due to an accidental eye poke.

Meanwhile, Nate Diaz has not stepped foot inside the Octagon since suffering a TKO loss to Jorge Masvidal in November of 2019. Prior to that setback, ‘The Stockton Slugger’ was coming off a unanimous decision victory over former lightweight champion Anthony Pettis.

UFC 262 is headlined by a fight between Michael Chandler and Charles Oliveira for the promotions vacant lightweight world title.

It is expected that another lightweight bout featuring Tony Ferguson taking on Beneil Dariush will take the co-main event slot previously held by Nate Diaz vs. Leon Edwards on May 15.

Also featured on that card is a men’s flyweight title fight rematch between Deiveson Figueiredo and Brandon Moreno.

What do you think of the news that Nate Diaz vs. Leon Edwards has been postponed until June’s UFC 263 pay-per-view event? Share your thoughts in the comment section PENN Nation!