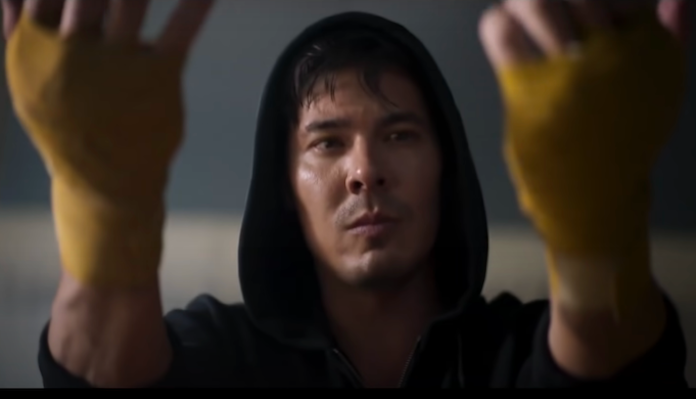 Mortal Kombat actor Lewis Tan says his character in the film, Cole Young, is based in part on UFC welterweight contender Jorge Masvidal.

Tan’s Mortal Kombat character, Young, is a jaded former MMA champion. At one point in the film, Young can be seen casually leaning against the cage in the moments before a fight, just like Masvidal did before his highlight reel 2019 knockout of Ben Askren.

“That’s what Jorge Masvidal did before he knocked out Ben Askren in [five] seconds and set the whole MMA community on fire,” Tan told Entertainment Weekly.

Tan’s nod to Masvidal was highlighted by MMA Fighting’s Damon Martin on Twitter. Martin’s Tweet caught the eye of Masvidal himself, who said he’s honored to have inspired the actor.

Actors using me as inspiration is a honor and after watching the trailer I’m hyped for the movie! #andnew #1of1 https://t.co/4F3m2zZU8D

“Actors using me as inspiration is a honor and after watching the trailer I’m hyped for the movie,” Masvidal wrote on Twitter.

Mortal Kombat, which is based on the hit video game series, is slated for release in theatres and on select streaming platforms in April. See the trailer for the film below:

Jorge Masvidal has not fought since July, 2020, when he lost a unanimous decision to UFC welterweight champion Kamaru Usman. However, Masvidal accepted that fight on just six days’ notice, replacing Usman’s originally scheduled opponent Gilbert Burns, so he didn’t lose much ground in defeat.

Prior to that loss to Usman, Masvidal was riding a trio of highlight reel stoppage wins. The first came at the expense of Darren Till, who he knocked out with a punch. Next up, he turned the lights out on Askren with a flying knee in just five seconds—the same win that inspired Lewis Tan’s Mortal Kombat character. He then defeated Nate Diaz via doctor stoppage in the UFC’s first and only BMF title fight.

Will you be watching Mortal Kombat when it comes out?