Cirkunov was caught early in the first round by Spann’s strikes on the feet and he was soon finished off with ground and pound. The No. 11 ranked light heavyweight in the UFC, Cirkunov was fighting for the first time since September 2019 against Spann, the No. 13 ranked light heavyweight. The oddsmakers pegged Cirkunov and his incredible BJJ skills as the betting favorite in this bout, but Spann pulled off the mini upset with the quick KO.

Taking to his social media following UFC Vegas 21, Cirkunov issued a statement about the loss. Check out below what the Latvian-Canadian fighter wrote on his Instagram stories. 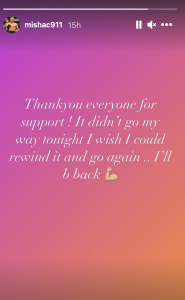 “Thank you everyone for the support. It didn’t go my way tonight. I wish I could rewind it and go again. I’ll be back,” Cirkunov wrote in his stories.

Cirkunov (15-6) is 6-4 overall in the UFC since joining the world’s leading MMA promotion in 2015. The 34-year-old fighter started off his Octagon tenure with four straight stoppage wins over Daniel Jolly, Alex Nicholson, Ion Cutelaba, and Nikita Krylov, before losing back-to-back fights by knockout to Volkan Oezdemir and Glover Teixeira. The Canadian bounced back with a submission win over Pat Cummins before losing by knockout to Johnny Walker. In his next fight, Cirkunov defeated Jimmy Crute via the rarely-seen Peruvian Necktie.

At age 34, Cirkunov is not a young fighter anymore, but he’s still a quality top-15 light heavyweight with power on the feet and amazing submission skills on the ground. Unfortunately, his durability has proven to be a major problem in the UFC as he’s been knocked out in four of his last six fights. It will be interesting to see what the UFC matchmakers decide to do with Cirkunov for his next matchup given the KO loss to Spann.

What do you think is next for Misha Cirkunov after losing to Ryan Spann at UFC Vegas 21?