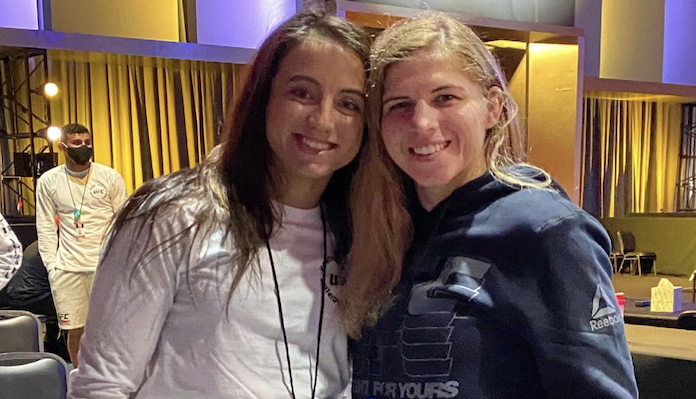 Maverick came up on the short end of the scorecards against Barber in a main card fight that took place Saturday at the UFC Apex. It appeared as though Maverick had done enough to win the first two rounds of the fight and take home a 29-28 decision on the judges’ scorecards, but somehow two of the three judges gave the fight to Barber. It’s worth noting that at MMADecisions.com, literally, every media member who was tracked scored the fight for Maverick. In the comments section, fans are calling it a robbery.

Taking to her social media following the fight, Maverick issued a statement after losing for the first time in the Octagon. In the statement, Maverick took responsibility for the loss and promised to come back better than ever, while also congratulating her opponent Barber and then taking a shot at the judges for their questionable scorecards for the fight.

A post shared by Miranda “Fear The” MAVERICK 🦅 (@fearthemaverick_homt)

Only those who have been here know how much this hurts to post. I lost… no if, ands, or buts. I did not do enough and remained too inactive in the 3rd round, among other things. I’ll be back better every time working on various skills. I do not know the will of God, but I accept it graciously. Congrats to @mayceebarber. Hold my spot. I have a feeling we’ll meet again soon. P.S. I thought my eyes were bad.

Despite Maverick losing this match on paper to Barber, she is still 2-1 in the UFC overall and considering she is just 24 years old, “Maverick” still has a very bright future in MMA.

Do you think Miranda Maverick deserved to get the judges’ decision win over Maycee Barber at UFC Vegas 32?