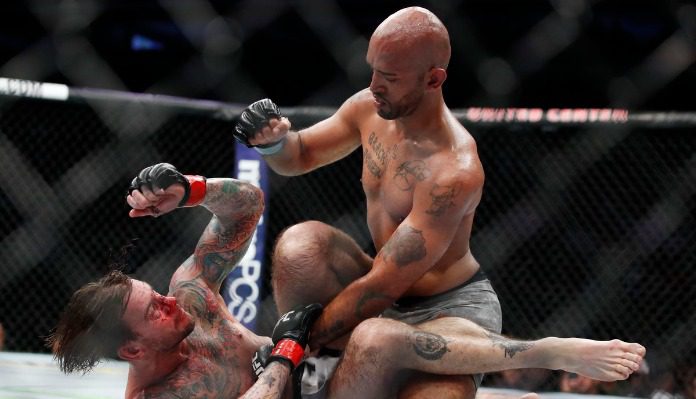 Mike Jackson is back fighting again in the UFC as he will welcome Dean Barry to the promotion at UFC Vegas 52.

The two were booked to fight in January and in May of 2021, but visa issues on both sides caused the fight to be scrapped. According to Jackson, this is a fight the UFC wanted to make so he wasn’t surprised when they made it for the third time.

“We signed to fight back in December 2020 and it was basically visa issues both ways,” Jackson said on Just Scrap Radio on BJPENN.com. “They initially told us we were fighting in Vegas and then I can’t remember the exact timeline, but around a month out they asked for my passport information as we were now fighting on Fight Island. I had lost my passport and in that small window of time, I couldn’t get one. Then, there were visa issues for him for the May fight and the fight was then put on the shelf.”

Once the fight was confirmed, Jackson got excited as he says this is a very fun fight for him. He knows it will be a striking fight, and for Jackson, he says that only makes him more confident as he believes this fight will be easier than the CM Punk fight.

“Dude, I’m so excited, I’m really excited to display my art to the world. Stylistically, the fight makes so much sense,” Jackson explained. “I’m excited, I’m more excited for this fight than the Punk fight, I think it will be an easier fight than the Punk fight. There are more dangers but as far as skill sets and preparation and what this guy brings to the table, I think this is one of the easiest fights for me… Make no mistake about it they signed Dean Barry for me, this guy has no idea what he’s getting into.”

Against Dean Barry, Mike Jackson is confident he can bring the Irishman past the first round which is where he thinks Barry will struggle. He knows once he is still there when the bell rings for the second round, he will begin to take over and eventually get a second-round KO.

“I’ve I’m being honest, if you look at my combat sports record people will say ‘oh you suck, you are 0-1 in MMA,’ I’m doing this all for shits and giggles, right, I’m doing it for fun. I just enjoy fighting,” Jackson said. “I do boxing, kickboxing, muay Thai, if you look at my combat sports record, boxing and kickboxing, I’m undefeated, all knockouts. I have my own unique style of fighting, I enjoy calling my second-round knockouts. I’m 100 percent on my second-round knockout calls and I see a second-round checkmate in this one.”

If Jackson does get his hand raised on Saturday, he says he will fight in the UFC again. Yet, he will be selective on who he faces as he doesn’t care about the rankings, instead, he just wants to show off his style and striking to the world.

“I’ve been in this sport for a long time and I can fight, man and I can fight at the highest level. Now, am I trying to get into the top-10, no, again I’m here for the shits and giggles, I just enjoy fighting. I have a particular set of skills that is pleasing to the eye,” Jackson concluded.

Do you think Mike Jackson will beat Dean Barry at UFC Vegas 52?