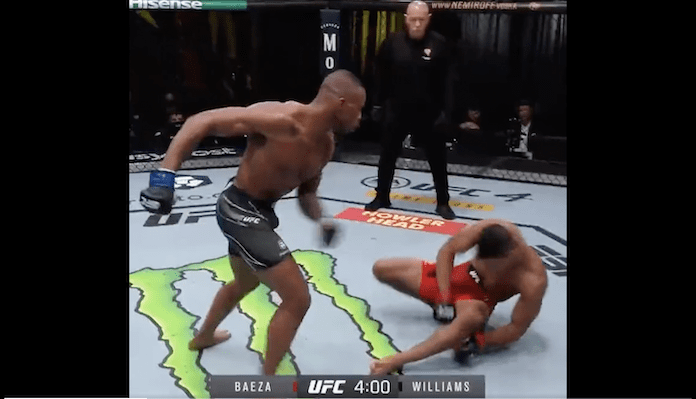 Baeza and Williams met in the center of the Octagon in a welterweight bout that took place on the UFC Vegas 42 main card. After two back-and-forth rounds to start the fight, the third round saw Williams land the final blow when he caught Baeza during an exchange, dropped him to the mat, and then finished him with ground and pound. It was an amazing win for Williams, who improved to 4-1 in the UFC with three knockouts, while for Baeza this was a tough loss. After starting his UFC career with a 3-0 record and finishes over Matt Brown, Takashi Sato, and Hector Aldana, Baeza has now dropped his last two fights to Williams and Santiago Ponzinibbio. That led to him take to his social media to release a statement following this latest defeat to Williams. Take a look at his statement below.

“What a humbling year. Can’t seem to get it right, I apologize to my team, my teammates, my family, my friends, and all those who support me. I failed again. Thanks to all those who reached out after the fight. I’m fine physically,” wrote Baeza on his Instagram.

The good thing for Baeza is that he is only 29 years old still, so he is still young enough to make those adjustments and improvements in his career. Still, after losing two straight fights, he is going to be in a must-win situation in his next outing. Clearly, Baeza is a talented fighter, but he has holes in his game and he knows that he needs to fix them.

What do you think is next for Miguel Baeza after getting knocked out by Khaos Williams at UFC Vegas 42 coming on the heels of a unanimous decision loss to Santiago Ponzinibbio?