If you recall, Tate had lashed out at West’s pupil in Ladd last week, this after she failed to make weight for her slated fight with Macy Chiasson at UFC Vegas 38.

“It’s one thing to miss weight, it’s another thing to try and cheat the scale and use every excuse in the book to not weigh in properly. Everyone saw you cheat and still came in a lb over. I bet you were every bit of 139.” – Miesha Tate captioned Aspen Ladd’s previous tweet where she explained her weight miss.

When asked by a fight fan how Ladd had “cheated”, Tate responded with the following explanation.

“Guaranteed she didn’t want put both hands up because she wanted to grab the curtain structure placed around her. Nice try.” 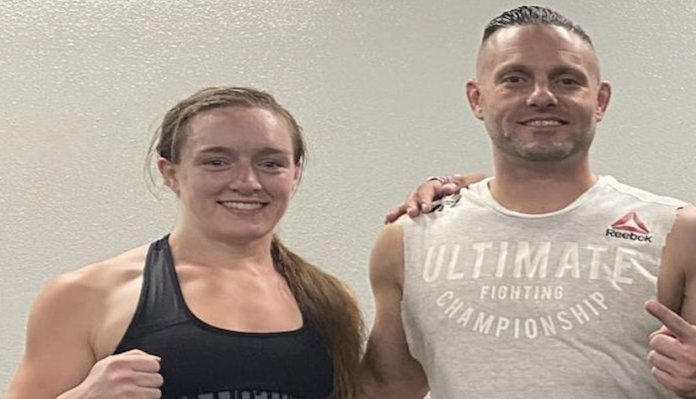 “Miesha Tate you are a coward. Remember when you lied saying we wanted you to fight late notice at 145 but you went on record saying we wanted it at 135 and we know for a fact you said you didn’t want that tough of an opponent? Trust me have good inside information.

“Please try and stand still, with hands in the air while dehydrated, dizzy, and nauseous all while trying to hold yourself because you are bleeding. You better hope you never have to fight Aspen. Oh wait you probably won’t you coward.” – West replied in a pair of tweets which were later deleted.

While Miesha Tate is obviously a savvy veteran in the fight game, she is no rookie when it comes to social media either. ‘Cupcake’ recently took to Twitter where she held Jim West “accountable” for his previous remarks.

Speaking of cowards. @Jwestgold15 deletes his tweet, luckily I’m no rookie so here’s a screen shot to keep him accountable. pic.twitter.com/Qfxj9cSRVO

“Speaking of cowards. @Jwestgold15 deletes his tweet, luckily I’m no rookie so here’s a screen shot to keep him accountable.” – Tate captioned a photo of West’s previous tweets.

Miesha Tate is slated to return to the Octagon at UFC Fight Night 198 on November 20 for a bantamweight bout with Ketlen Vieira.

This article appeared first on BJPENN.COM
Previous articleHolly Holm out of main event fight against Norma Dumont
Next articleDaniel Cormier shares his thoughts on Henry Cejudo’s desire to become the UFC’s first ever three-division champion
© Newspaper WordPress Theme by TagDiv