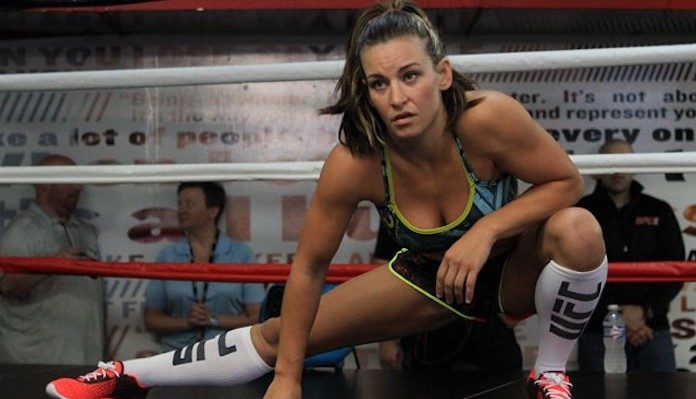 Last Saturday night, ‘The Bullet’ faced off against Taila Santos at UFC 275. Despite entering the bout as a massive underdog, the Brazilian put up an admirable effort. Fighting through a broken orbital, Santos secured multiple takedowns and controlled the bout on the mat.

The women’s flyweight champion, however, rallied to end the bout. At the end of the contest, Shevchenko was declared the winner via split decision. The bout was the first time the 34-year-old had lost more than one round in a fight since moving down to 125-pounds in 2018.

Miesha Tate has now given her take on the fight on The MMA Hour with Ariel Helwani. There, the former champion opined that she would have a lot of success grappling Valentina Shevchenko.

Presently, Miesha Tate is scheduled to return against Lauren Murphy at UFC 276 next month. The bout will be her flyweight debut, and if she wins, could receive a title shot next.

“She [Taila Santos] wrestled, this is what I’ve been saying the whole time. We already know what happens when people strike with Valentina, it’s not a great day for those people. But, even with what you saw with Julianna Pena if we can dial back it a minute, yeah she got arm barred she made a mistake… But, she got taken down by Julianna, and this is the second time she’s gotten taken down by someone who wrestles.”

Miesha Tate continued, “She out scrambled Valentina on the ground, and these are things I’ve been saying I could do. I am capable of doing these things. I’m capable of making this fight more interesting than people who are too timid to go in and grab Valentina Shevchenko… I believe that Valentina went in with a little bit of an injury, sure, that could’ve played a role in her footwork and ability to defend on the ground. But, I’m licking my chops.”

What do you think about Miesha Tate’s comments about Valentina Shevchenko? Sound off in the comments below!