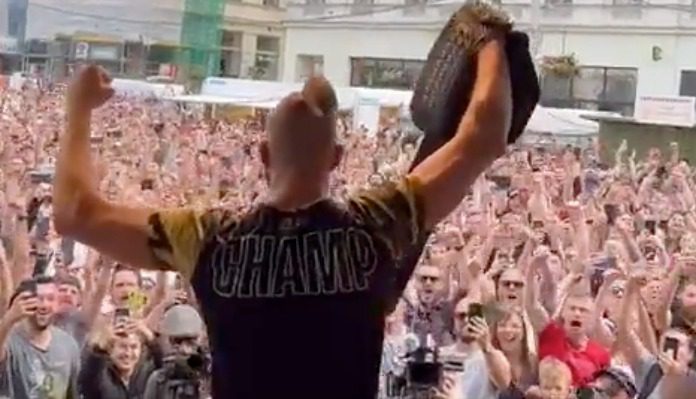 Jiri Prochazka returned home to the Czech Republic and got a hero’s welcome after becoming the first UFC champion from the country.

Prochazka earned a fifth-round submission over Glover Teixeira to become the champ in stunning fashion. The fight was back-and-forth and one of the best light heavyweight fights of all time.

After the victory, Prochazka returned home to the Czech Republic and his country threw a massive event welcoming him home. The video was captured by his management team, Paradigm and the UFC.

That crowd tho!? 😳@Jiri_BJP returns home with the belt to a champion's reception! 🇨🇿 pic.twitter.com/nPphn8YGol

Jiri Prochazka (@jiri_bjp) receives a Hero’s welcome in his hometown of Brno. He is the first UFC Champion from the Czech Republic in history. 🇨🇿 pic.twitter.com/EIh22iXfd6

Although Prochazka has become a star in North America due to his fighting style, this was a massive hero’s welcome for the pride of the Czech Republic. Getting these hero’s welcomes for non-American champs is also nothing new as we saw Charles Oliveira getting a parade following him becoming the UFC’s lightweight champion.

Despite Prochazka earning a submission win over Teixeira at UFC 275, he was vocal in his displeasure with his performance.

“From my side it was a horrible fight, horrible performance. Honestly, you saw that fight,” Prochazka said after UFC 275. “I just survived some moments. It’s my plan to be dominant and not just to be a survivor in there. For you it’s beautiful because you like to be entertained, but for a fighter, I like to fight clean.”

With the win, Jiri Prochazka improved to 29-3-1 and is now 3-0 in the UFC and will likely have his first title defense against Jan Blachowicz. Before signing with the UFC, he was the RIZIN light heavyweight champ and turned down earlier opportunities to sign with the UFC as he wanted to make sure he was fully ready to make compete with the best. In his first two UFC fights, he knocked out Volkan Oezdemir and Dominick Reyes.

What do you make of the hero’s welcome Jiri Prochazka received in the Czech Republic?