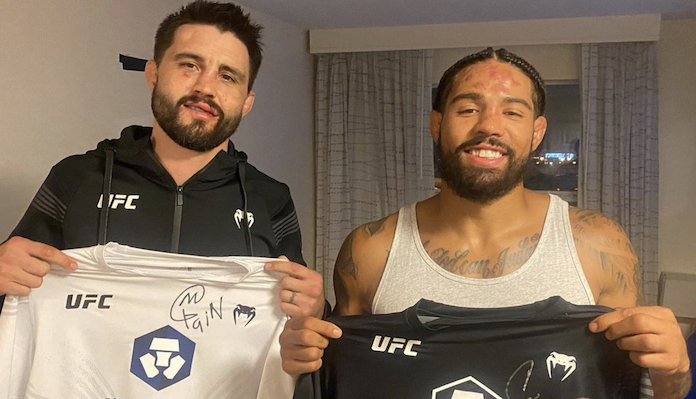 Griffin won a unanimous decision over Condit in a great welterweight fight that served as the main event of the UFC 264 preliminary card. Griffin won the first round with his striking, then Condit took back the second with his own standup, and then “Pain” won the third by outstriking Condit and then taking him down in the final minute of the fight to seal the deal. It was an outstanding effort by both fighters, who have lots of mutual respect.

Following UFC 264, Griffin took to his social media to post a photo of himself and Condit trading autographed UFC jerseys with one another. It’s a tradition that occurs in other sports but we haven’t really seen this in MMA and it is very cool to see this respect.

This is what’s it about. Traded autographed @ufc @venum jerseys with @carloscondit It was an honor my brotha #ufc264 #conditgriffin #jerseyswap #mpg

The win over Condit was the third straight victory inside the Octagon for Griffin, who defeated Song Kenan and Ramiz Brahimaj in his last two fights prior to this one. With a three-fight win streak and coming off of an outstanding fight with Condit, it’s possible that Griffin could potentially fight someone in the top-15 in his next outing.

As for Condit, the loss to Griffin snapped a two-fight win streak for “The Natural Born Killer,” who had beaten Matt Brown and Court McGee prior to this loss to Griffin. While Condit is not the same elite fighter he once was, he showed against Griffin that he’s still as tough as they come, and it will be interesting to see who the UFC matches Condit up with next.

What do you think is next for Max Griffin and Carlos Condit following their fight at UFC 264?