Matt Brown explains why he sides with Jake Shields over Mike Jackson following recent altercation: “If you’re a UFC fighter, you’re opening yourself to those consequences”

Matt Brown is explaining why he sides with Jakes Shields over Mike Jackson following their recent altercation.

Brown (23-19 MMA) has taken a side after the physical altercation occurred between Shields and Jackson at the UFC PI in Las Vegas.

It was Jackson who took to social media calling Shields a ‘Nazi’ and a ‘white supremacist’. These comments were the lead up to the incident which ultimately occurred at the UFC Performance Institute where Shields and Jackson were training. 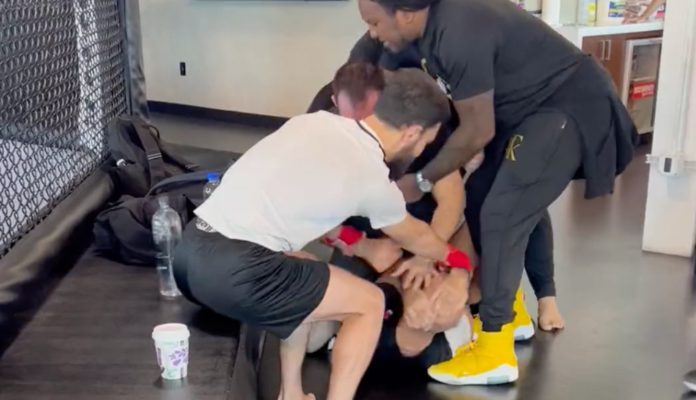 UFC veteran Matt Brown, 41, speaking on ‘The Fighter vs. The Writer’, explained why he is siding with Shields (h/t MMAFighting):

“I mean more power to Jake. This guy was talking s**t to him and I know Jake says some f**king crazy s**t on Twitter. I’ve followed him for a while. He says some s**t that no one’s going to agree with but you don’t go calling people Nazis and s**t. Jake is far from a Nazi.”

“He might say some s**t you don’t agree with. He might be a little out there on some things according to you, or according to someone else, but come on, man. You know you can’t say that s**t and then see Jake Shields in person and he’s not going to do anything. So f**k Mike Jackson.”

“You’re a UFC fighter, too. You are in the UFC, too. You’re an open book. That’s an open invite to f**k you up or to fight you. Especially at the UFC PI. What do you think Jake’s going to do? More power to Jake. F**k that guy.

“If you’re a UFC fighter, you’re opening yourself to those consequences. You’re going to talk s**t to another UFC fighter, when you guys see each other you’re probably either going to be fighting or he’s going to try to fight you. You see this all the time. Guys are ready to throw down any second.”

Brown believes that fighters have to understand that if you’re out there on social media lobbing insults, there will be repercussions, should those fighters actually meet in the cage or elsewhere.

“I’d say it to Mike Jackson’s face. You’re a f**king p***y. You say that s**t to Jake Shields online and you got your ass whooped. Suck it up. Those are fighting words that you said. You opened the f**king door, bro. You can’t accept those consequences, you’re a p***y and you’re going to start pressing charges?”

Jackson has indicated that he plans on pressing assault charges against Shields.

“You said fighting words and you got into a fight about it. You lost the fight. Fair enough. Jake’s a f**king bad dude. He’s a tough son of a b*tch. A lot of people are going to lose a fight to him. There ain’t no shame in that.”

Bottom line is Matt Brown believes Mike Jackson should just own what happened and let it go.

Do you agree with Matt Brown’s commentary on the altercation between Shields and Jackson? Have you picked a side?