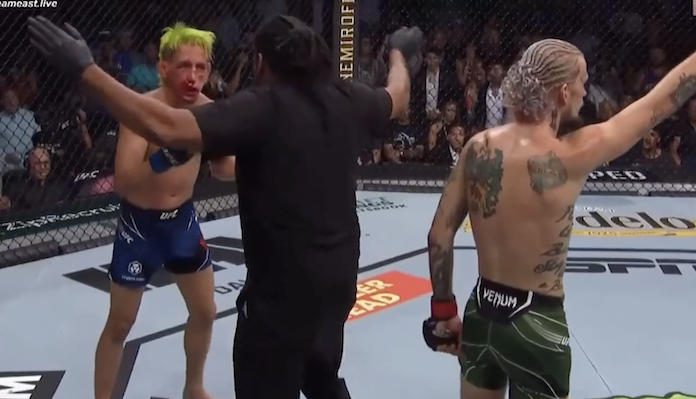 Moutinho and O’Malley went to war for nearly 15 minutes to kick off the UFC 264 pay-per-view card. Although Moutinho took the fight on short notice after Louis Smolka was forced out of the fight, he showed off incredible toughness, durability, and heart as he nearly went the full three rounds with one of the best bantamweight prospects in the UFC right now in O’Malley before referee Herb Dean called a stop to the fight at 4:33 of the third round.

Although Moutinho absorbed a bantamweight record 230 significant strikes over the course of the fight, he was not happy that Dean stopped the fight and wanted to continue. Though Moutinho would have lost the fight either way, his warrior spirit meant that he wanted the ref to give him the chance to finish the fight. Taking to his social media the day after UFC 264, Moutinho shared an absolutely hilarious meme regarding the controversial stoppage.

Despite losing the fight, Moutinho — along with O’Malley — was rewarded with a $75,000 bonus for “Fight of the Night.” Considering he was not in the UFC at this time a week ago, and that he was just working 80 hours at his paint factory job before quitting it for his dream job in the Octagon, the bonus money will surely come in handy for the youngster.

Even though Moutinho lost the fight, he gained plenty of fans by showing off his big heart in the fight. He will likely be given several months off to heal up following such a tough fight, but his return fight will likely be very highly anticipated by fans given his toughness.

What do you think is next for Kris Moutinho after losing to Sean O’Malley at UFC 264?