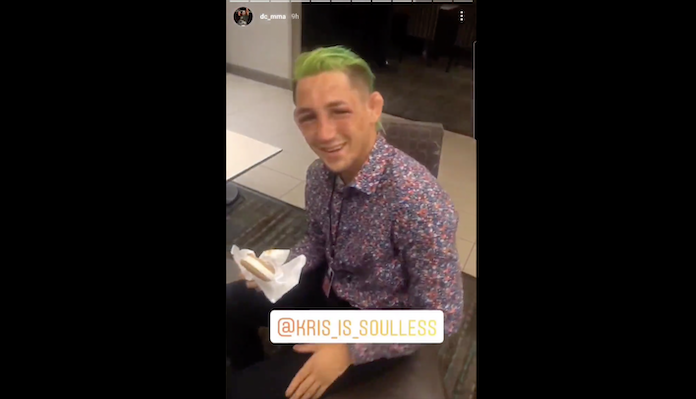 Cormier was part of the commentary team that called Moutinho’s fight on Saturday night at UFC 264 against top bantamweight prospect Sean O’Malley. Despite Moutinho taking the fight on extremely short notice, he put on a memorable show for the fans as he was able to continue walking forward and eating shots like a zombie as O’Malley lit him up with combinations. Although O’Malley landed 230 significant strikes in the fight — the second-most all-time in a three-round UFC fight behind Nate Diaz — the story of the fight was arguably Moutinho’s heart as he was able to absorb so much punishment and keep ticking.

Taking to his social media following the event, Cormier caught up with Moutinho backstage following UFC 264 and congratulated the youngster on one heck of a UFC debut fight.

“You’re the most savage son of a b*tch I’ve ever met man. Congratulations. This guy right here. Good job buddy. Congratulations and good job with your money. You got paid, huh?” Cormier said, referencing Moutinho taking home $75,000 for “Fight of the Night.”

Moutinho’s MMA record dropped to 8-5 overall with the loss to O’Malley, but no one is going to care what his record is if he is going to fight with as much heart and toughness as he showed against O’Malley at UFC 264. UFC president Dana White said following UFC 264 that Moutinho was sent to the hospital for further scans and since he took so much damage in this fight, he will likely be on the shelf for the next several months. But when he returns to the Octagon, you can guarantee that fans are going to be tuning in to watch him scrap.

Who do you want to see Kris Moutinho fight next after losing Sean O’Malley at UFC 264?