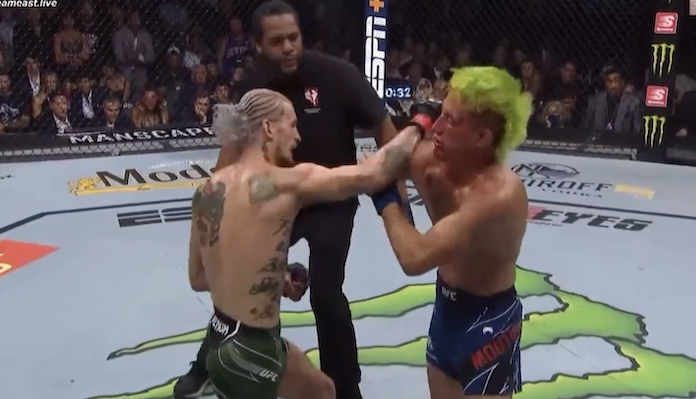 UFC bantamweight Sean O’Malley reacted following his “Fight of the Night” TKO win over the ultra-durable Kris Moutinho at UFC 264.

O’Malley landed 230 significant strikes in the fight — eight short of the UFC record for a three-round bout set by Nate Diaz vs. Donald Cerrone at UFC 141 — before referee Herb Dean called a stop to the fight with just seconds to go in the third and final round. It was an incredible performance by O’Malley, who broke bantamweight records for strikes landed in a fight, and for Moutinho, it was an amazing show for a fighter who very few fans knew a week ago. For Moutinho, even though O’Malley won, his stock also went up with the fight.

For O’Malley, though, this was another amazing showing by him as he improved his UFC record to 6-1 with four wins by knockout. Following the fight, “Suga” took to his social media to react to his performance. Take a look at what he shared on his Instagram below.

For O’Malley, this was another great performance and his second straight win by knockout following his first career loss to Marlon Vera last summer. Fans were critical of the matchmaking here as the UFC brought in Moutinho with a 2-2 record over his last four fights to take on one of the top prospects in the division in O’Malley. But Moutinho proved his worth as he toughed it out and made it the full 15 minutes with one of the best prospects in the division.

After winning four of his last five fights by knockout, it seems likely that the UFC will match up O’Malley with someone in the top-15 again. A rematch with his rival Vera certainly makes sense, but O’Malley has also called out fighters such as Dominick Cruz. At this point, it’s time that we see O’Malley get tested against someone with a number beside them.

What do you think is next for Sean O’Malley following his win over Kris Moutinho at UFC 264?