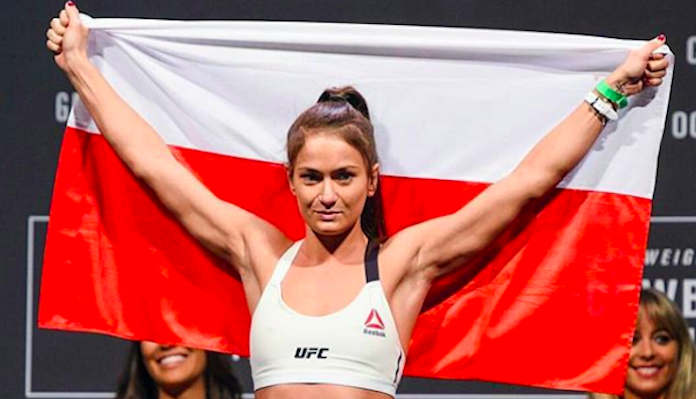 Karolina Kowalkiewicz has sent a heartfelt message to Joanna Jedrzejczyk following her retirement at UFC 275.

Last Saturday night in Singapore, Joanna Jedrzejczyk retired from mixed martial arts following her knockout defeat at the hands of Weili Zhang. While she had a few good moments throughout the course of the fight, it was clear to see she was a step behind with the Chinese star landing a vicious spinning back fist to secure the win.

Karolina Kowalkiewicz, meanwhile, has had a complicated relationship with Jedrzejczyk throughout the course of their respective careers. They met inside the Octagon back at UFC 205 and on that night, it was Joanna who eased to a unanimous decision win to retain the UFC strawweight title.

Years later, Jedrzejczyk helped Kowalkiewicz to try and bounce back from five straight defeats – which she managed to do with a submission triumph over Felice Herrig earlier this month.

After Joanna’s retirement decision, Karolina put out this statement on social media.

“I’ve been “number 2” pretty much my entire sports career. I don’t mind it, on the contrary, I’m proud of it because it’s you @joannajedrzejczyk you were and will always be number 1 for me! You are a legend, you wrote beautiful and inspiring stories. You are not only a great athlete who did even the impossible, but also a wonderful person. When our relationship wasn’t the best I needed help… I called you and even though you didn’t have to help me, I could count on you. You are great not only in the octagon but also in life. Now use it a handful. I wish you all the best from the bottom of my heart. You were, are and will be a great inspiration… #teamjj #ufc #att #legend #inspiration #jj #polishpower”

What do you think is next for Karolina Kowalkiewicz in MMA?