Aldo (30-7 MMA) collided with Edgar on the main card of UFC 200 in July of 2016. It was the Brazilians first Octagon appearance since suffering a 13-second loss to the aforementioned Conor McGregor at UFC 194.

Jose Aldo would go on to outclass Frankie Edgar that summer evening in Las Vegas, walking away with a unanimous decision victory and the promotions interim featherweight title. 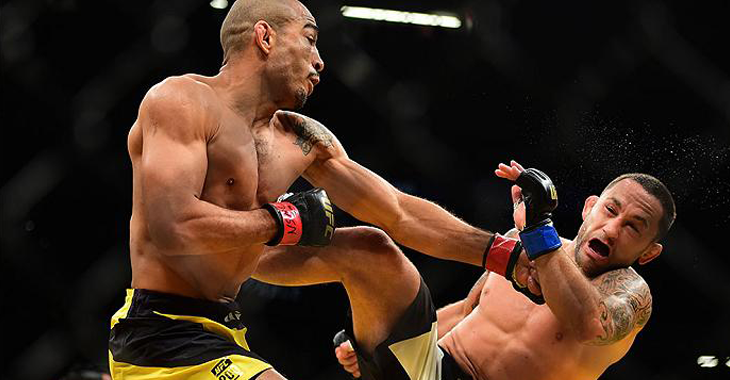 In a recent interview, Jose Aldo spoke about his previous win over Edgar and revealed that he actually received a gift from his previous opponent (Conor McGregor) following the victory.

”When I fought Frankie Edgar and won the title again, (McGregor and I) were staying at the same hotel, side by side. He saw me, and even sent a gift congratulating me for the belt I had just won. That was intimate, brother. He knows that, he sent it to my room. I see no problem with that. It was a way of trying to show love for me and my family. It was really intimate. It was nice, it was nice. I don’t know what his intentions were, right? But it was nice.” – Jose Aldo told Guilherme Cruz on the Portuguese-language podcast Trocação Franca (via Sportskeeda).

Aldo is slated to return to action on December 4 for a key bantamweight bout with Rob Font. If the Brazilian legend can emerge victorious in that affair, he will be positioned nicely for a run at 135lbs gold.

Are you surprised to hear that Conor McGregor bought his former opponent in Jose Aldo a gift following his decision win over Frankie Edgar at UFC 200 in July of 2016? Share your thoughts in the comment section Penn Nation!