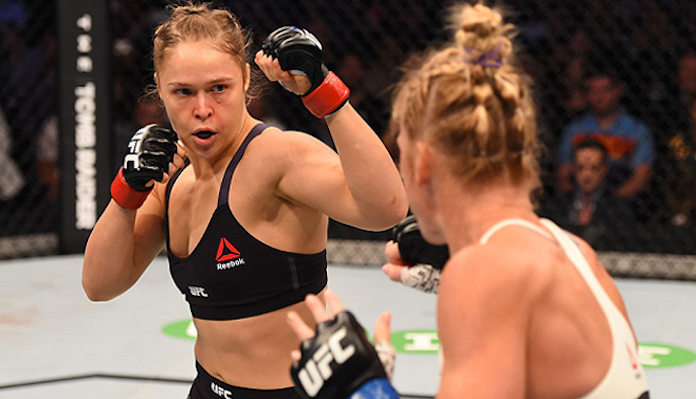 Speaking on the latest Joe Rogan Experience Fight Companion podcast, BJJ specialist Eddie Bravo asked Rogan if he expects to ever see Rousey back in the Octagon.

Rogan did not hesitate.

While Rogan, Bravo and Brendan Schaub all had good things to say about Rousey’s  ground game — particularly her legendary armbars — Rogan believes her limited toolset is what ultimately got her into trouble in her last two fights: brutal, knockout losses to Holly Holm and Amanda Nunes.

That said, the UFC commentator feels Rousey could have greatly improved had she relocated to a bigger, more reputable gym like American Top Team.

“She had a very singular attack,” Rogan said of Rousey’s game. “Armbar. It was all armbars.

“I think if she went to American Top Team […] She would have to separate and move to a real camp,” he continued. “She would have to train with real trainers, a real group of killers, grappling trainers, wrestling trainers, make sure she’s got the best sparring partners, and more importantly, a real mind. [Tristar’s] Firas Zahabi, somebody like that, or [American Top Team’s] Mike Brown, or [Roufusport’s] Duke Roufus — someone. A top of the food chain person — [AMC Pankration’s] Matt Hume — a top of the food chain coach.”

While Joe Rogan believes a better team and more strategic coach would have greatly benefited Ronda Rousey, he doesn’t believe this is a move she ever would ever make.

What do you think of these comments from Joe Rogan? Could Ronda Rousey have performed better in her final fights with a stronger team behind her?