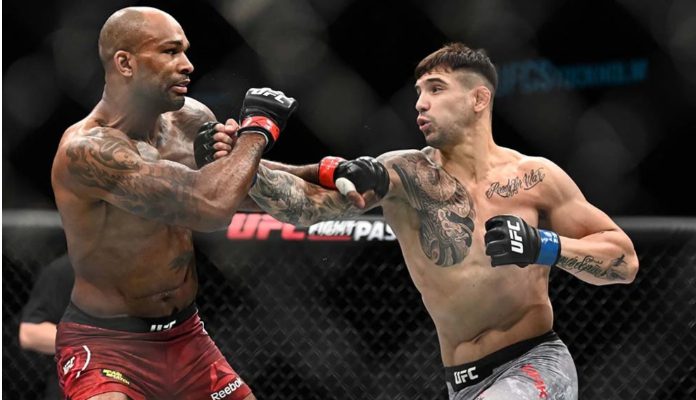 Jimi Manuwa wants to make it clear that he did not sucker-punch Aleksandar Rakic, but slapped him over some comments the Austrian made.

Back in June of 2019 at UFC Stockholm, Manuwa and Rakic fought and it was the Austrian who won by head kick KO in just 42-seconds. Since the loss, Manuwa says Rakic has been disrespectful as he has been DM’ing him asking if the Brit needs money given Rakic earned 50k for his KO win.

With that, Manuwa made it clear the next time he saw the Austrian he would slap him for his comments and that is exactly what he did at UFC London on Saturday.

“It wasn’t a sucker-punch, we were face-to-face and I slapped him and he moved away and did nothing,” Manuwa said to BJPENN.com on Sunday night. “The security came and that was the end of it and I didn’t make a scene. I told him I was going to slap him when I saw him and that is what I did… He was walking past and I said to him ‘what are you saying now?’ and he was acting all confused. He tried to keep walking so I slapped him and he was like a fox in the headlights. He didn’t say anything after.”

According to Jimi Manuwa, he says the slap had nothing to do with losing to Aleksandar Rakic. Instead, he points to the fact that he is friends with people he has fought and lost to, but says Rakic is disrespectful and takes stuff too far.

“The fight is the fight, it’s not the first time I’ve lost. I’ve lost to Rumble Johnson, Gustafsson, Oezdemir, I lost to Blachowicz and we are all friends now. I text them every now and then to check in and we are all respectful,” Manuwa said. “Rakic, I don’t know what it is. I got asked by a fan what fight do I want back and I said the one with Rakic because I feel like I didn’t get to show my real skills. He came back and said ‘oh I knocked you out, do you need some money off the 50 bags I earned?’ Or he sends stuff he bought and says he bought it using the money he got from knocking me out. Just being proper disrespectful and I said to him, ‘when I see you keep the same energy’ and that’s it. I just had to give him what he deserves for acting like a troll and a keyboard warrior online.”

Manuwa ended up doing as he says and slapped Rakic the first time he saw him which was at UFC London. Whether or not anything comes from it is to be seen.

What do you make of Jimi Manuwa’s side of the story involving his altercation with Aleksandar Rakic at UFC London? Sound off in the comment section, PENN Nation!