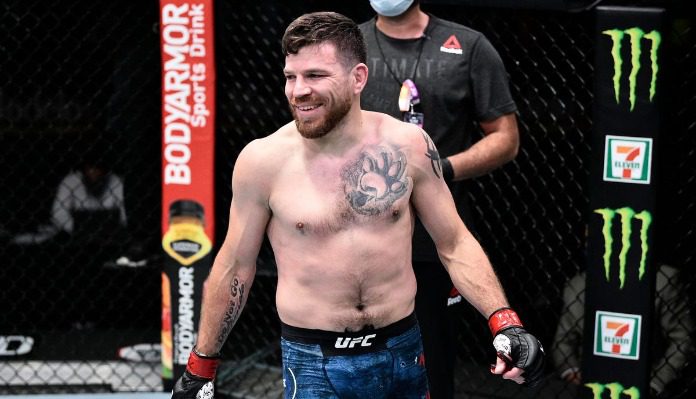 Miller was originally supposed to fight Bobby Green on July 2, but just over a week out it was revealed that Green was out and Cerrone had stepped up on short notice. The fight will also take place at welterweight and for Miller, he’s just happy he got a fight.

“I heard Bobby was out, Sean Shelby called me up and said Bobby was out and he was going to look for a new opponent,” Miller said on Just Scrap Radio on BJPENN.com. “It took a couple of days, and I thought it was kind of odd that it was announced that Bobby was out. I shot Sean another text asking for an update and he called me when I was in bed, so talked to him in the morning and he told me Cerrone took the fight and asked if I would do it at 170 so I said let’s go.”

Of course, Miller and Cerrone have met before, way back in 2014 with ‘Cowboy’ winning by second-round KO. Although they have fought before, it was eight years ago so Miller doesn’t view this as a real rematch as both are different fighters.

“That fight was eight years ago, there can’t be a lot of takeaways. I’m sure he’s like this worked in the last fight so maybe try and throw those similar shots,” Miller explained. “On the flip side, I had one of the rougher camps I had going into that fight, banged up both of my feet… I’m a completely different fighter and I know that he’s a different fighter so I’m going into there with the same mentality that I was going into the Bobby fight or someone making their debut. I’m going in there to make it a Jim Miller fight. Eight years ago is a long time so I’m not too concerned about it.”

Although Jim Miller does view this as a different fight, he is excited to share the Octagon with Donald Cerrone as this will be Miller’s 40th UFC fight.

Miller also knows both of them will come to fight which will make it entertaining for the fans. Yet, in the end, Miller has all the confidence he will get his hand raised and extend his win streak to three.

“Just go in there and fight. We are both dangerous dudes, I’m ready to fight hard, I feel good and I’m in great shape,” Miller said. “Going from a boxer to more of a muay Thai, kickboxer style is a little different but it doesn’t matter, I’ve sparred with so many different styles and body types. The tough part is done, I’m in shape and ready to go. I’m just going out there to have fun, fight as hard as I can and I’m confident I can get the W this time.”

If Miller does get his hand raised, he will need to sign another contract but plans to return in December against whoever they give him as the real goal remains of retiring at UFC 300.

“I’d like to fight again by the end of the year, get one in December or something like that, and just keep moving. Just keep training and hopefully keep the momentum going,” Miller concluded.

Who do you think will win Jim Miller or Donald Cerrone?