White made headlines for all the wrong reasons on January 2nd after a video of him slapping his wife at a New Year’s Eve party in Mexico went viral on TMZ.

The altercation occurred at a nightclub in Cabo San Lucas and saw White’s wife Anne slap Dana with the UFC President promptly striking her back.

Dana White quickly acknowledged responsibility for the incident, stating that he is embarrassed and wants to focus on his family at this time.

“I’m embarrassed, but it’s also one of those situations where we’re more concerned about our kids. We have three kids, and obviously since the video popped up, we’ve shown the kids the video and we’re more focused on our family right now. People are going to have their opinions on this. Most of the people’s opinions will be right – especially in my case. You don’t put your hands on a woman ever. My wife and I obviously love each other. We’ve been together for a very long time. We’ve known each other since we were very little, and this is just one of those unfortunate situations.”

Dana White has faced heavy criticism for his actions from fans and some fighters, however the parent company of the UFC, Endeavor, has declined to comment on the incident. In addition, ESPN and other affiliate media outlets have shared little to no coverage on the subject.

Unhappy with the lack of coverage, actor D.L. Hughley took to Twitter where he called out the media for providing Dana White with “white privilege”.

If #ChrisBrown, #BobbyBrown or #AntoinioBrown did what #DanaWhite did, the media wouldn’t stop talking about it!! What can Brown do for you?………Be White!! #TeamDl

“If #ChrisBrown, #BobbyBrown or #AntoinioBrown did what #DanaWhite did, the media wouldn’t stop talking about it!! What can Brown do for you?………Be White!! #TeamDl“

“What can BROWN do for you?” Apparently not a damn thing! If that had been a brotha, it’d be NONSTOP coverage, dredging up a playground fight from the 3rd grade, scouring old tweets, you name it. #DanaWhite ‘s ENTIRE LIFE is immersed in brutal, physical violence, he’s amassed a fortune from it. Where are the salacious headlines?? Where’s the pressure?? Ohhhhh, he apologized🙄 #WhitePrivilege (PUN INTENDED) scores a 1st round knockout yet again. #TeamDL”

Those comments were quickly applauded by fellow American actor Jamie Foxx, who commented on the post with the following: 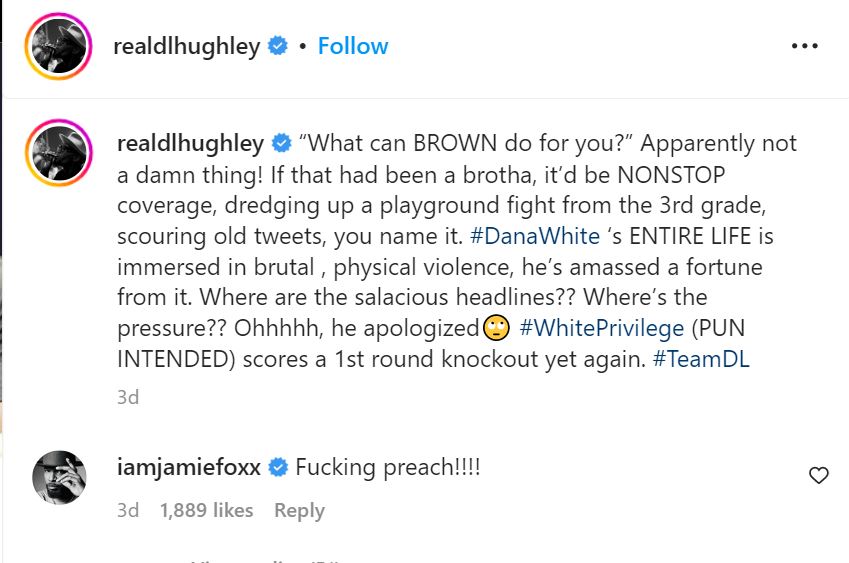 Do you agree with D.L. Hughley and Jamie Foxx that Dana White is receiving “white privilege” from the mainstream media? Share your thoughts in the comment section PENN Nation!

This article appeared first on BJPENN.COM
Previous articleFormer UFC champion Khabib Nurmagomedov is stepping away from coaching and leaving MMA entirely
Next articleVideo | Alex Pereira brings his UFC middleweight belt back to his Pataxó tribe in Brazil
© Newspaper WordPress Theme by TagDiv