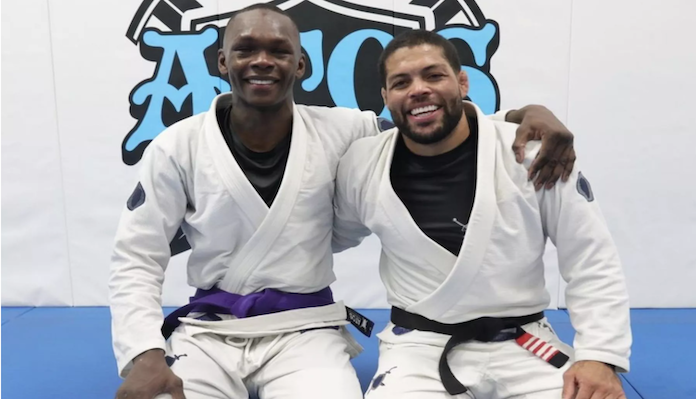 UFC middleweight champion Israel Adesanya said that he is excited to show off his BJJ purple belt skills in the Octagon at some point.

Adesanya, the reigning UFC middleweight champion, will move up to 205lbs this Saturday night at UFC 259 when he takes on UFC light heavyweight champion Jan Blachowicz. The expectation is that this fight between two talented strikers will take place on the feet, but Blachowicz has some ground skills and there is the chance the fight goes to the mat. If that’s what happens in the fight, then Adesanya is fully prepared. In fact, he wants to show off that side of his game, hinting that a submission victory could be coming soon.

Speaking to reporters ahead of UFC 259, Adesanya teased that he might show off his BJJ purple belt skills in this fight. “The Last Stylebender” has 15 knockout wins and five wins by decision, but he has never finished a fight by submission. Although he prefers to stand and trade, Adesanya told fans to watch out, because a submission could be on its way.

“You guys haven’t even seen me on the ground yet. I mean, just got my purple belt courtesy of Andre Galvao in San Diego at the Headquarters. While I was there for five weeks, I can tell you, they can tell you, my jiu-jistu went all the way up. I look forward to using my grappling at some point. I do want to choke someone out, but they just keep getting knocked out,” Adesanya said.

When asked if he will be the one who initiates the grappling against Blachowicz, Adesanya said that he would prefer to stand and trade. But if Blachowicz wants to test Adesanya’s grappling, the UFC middleweight champion has no problem going that route with him.

“Not really, I do like striking. But it’s a deceptive thing. I’m like alright if you want to jump in the pit, in the hole of my game, and see how deep that hole goes, be my guest. By the time it’s too late they found out it’s a trap and they can’t get out,” Adesanya said.

Do you think we will see Israel Adesanya show off his ground game against Jan Blachowicz?