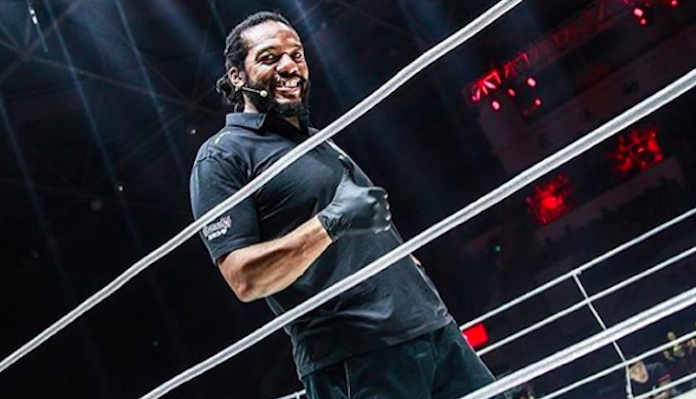 Anders was hurting Stewart up against the fence with punches and looked to be on his way to a win, but when Stewart went to the mat and took a knee, Anders nailed him in the head with an illegal knee and the fight was stopped. Dean declared the foul unintentional and thus the fight was ruled a No Contest. The fact Dean called it a No Contest instead of a DQ, which Petr Yan was hit with by referee Mark Smith when he nailed Aljamain Sterling in the head, left some fans who were watching take to social media to share their confusion on why one of these fights was a No Contest and why the other was a disqualification.

Ratner, the vice president of regulatory affairs with the UFC, was a recent guest on MMAjunkie.com radio and explained why Dean ruled the Stewart vs. Anders fight a No Contest instead of a disqualification. According to Ratner, it comes down to referee discretion. In the case of the Yan vs. Sterling fight, Smith felt that the knee was intentional. Dean, however, thought the knee in the Stewart vs. Anders fight was accidental, and apparently, the veteran official thought that Stewart baited Anders.

“What we start with is the referee’s judgment. That’s the most important thing. He’s going to determine, in his mind, whether it was intentional or accidental. It certainly changes the way the fight is scored or the outcome. In the Yan fight, Mark Smith was the referee, and he felt that the knee was intentional. And therefore, because Sterling couldn’t go forward, that became a disqualification,” Ratner said.

“The difference from last Saturday’s fight was Herb Dean felt that maybe (Anders), who landed the knee, (and Stewart), who was putting his hand up and down, kind of baited him into that knee. He felt it was an accident. Therefore it became a No Contest or a ‘No Decision.’ If it would’ve (gone) two rounds full, we would’ve gone to the scorecards.”

Anders apologized to Stewart over the knee, calling it a “critical error.” Once Stewart heals up from the damage he took in the fight, it makes sense for the UFC to run it back with Anders given the fact the fight ended in such a controversial fashion.

Do you agree with Herb Dean that Darren Stewart baited Eryk Anders into throwing that illegal knee?