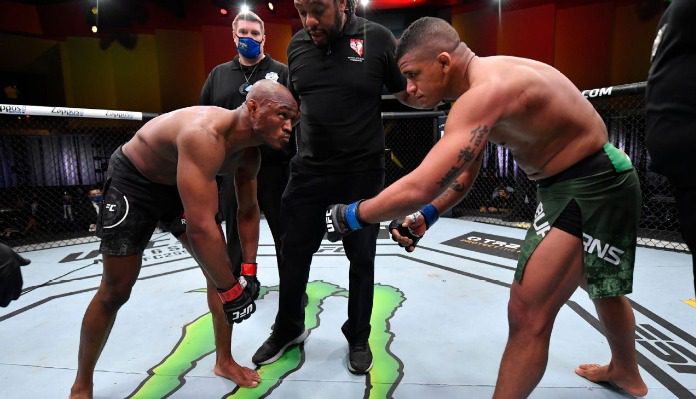 Gilbert Burns brought in a familiar face for his UFC 273 fight against Khamzat Chimaev.

Burns, who trains at Sanford MMA, says Usman came back to the gym to help him prepare for the Swede. Usman, of course, used to train at the gym but when he was booked to defend his title against Burns, he left to go train under Trevor Wittman. Yet, throughout their fight camp, the two always remained close and they are now training with now another again.

“Usman came a couple of days to help out,” Burns said to TMZ Sports… “He was helping me a couple of times, not training with me but kinda coaching. Very high IQ and very good advice. Was good to have him around.”

It is interesting to hear that Kamaru Usman is helping prepare Gilbert Burns given the fact that if the Brazilian wins, he could very well earn a second crack at the champ. Yet, Burns says the two remain friends and they know their fight is all business as he doesn’t even view it as fighting Usman, instead, he says all he thinks about is winning the belt.

Before the rematch can happen, both Burns and Usman will need to win their upcoming fights. The Brazilian is a sizeable underdog against Chimaev while the champ is expected to face Leon Edwards in July.

What do you make of Kamaru Usman helping Gilbert Burns prepare for his UFC 273 fight against Khamzat Chimaev?