Gilbert Burns did what not many people have done and that is call out Khamzat Chimaev.

For the longest time, UFC president Dana White claimed that no one wanted to fight Chimaev and suggested how hard it was getting him a fight. Now, at UFC 273, the Swede will have the toughest challenge of his career when he faces former title challenger Gilbert Burns.

According to the Brazilian, he asked for this fight as he knows if he defeats Chimaev, he gets a lot of hype and could earn a title shot, so the risk was well worth the reward.

“Yes, I agree. He needs a big test, I need a big opponent, I wasn’t fighting, he wasn’t fighting. I asked for this fight, they gave it to me, now we are fighting. I like this fight, I asked for this fight,” Burns said to TSN. “Before they offered it to me, when he fought Li Jingliang, was on October 30 after the fight I text Ali (Abdelaziz) and say ‘hey, they are going to offer me, I have a feeling, you can say yes, I want to fight this guy.’ Before they even offered me the fight I already said yes. Being in the UFC for eight years, fighting everybody, I kind of saw the picture going that I knew they were going to offer me him so I was ready for it.” 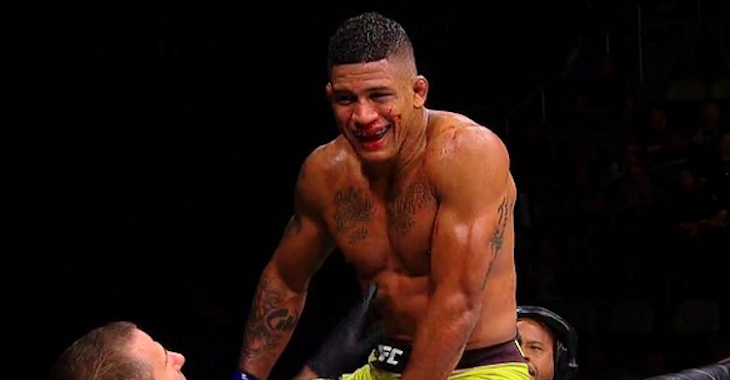 Gilbert Burns says the plan is to finish Khamzat Chimaev and if he does that he would cement himself as the top contender at welterweight. That played a big role in Burns asking for this fight as he says he has two goals of fighting the best and becoming a champion and beating Chimaev takes him a step closer to another title shot.

“It all depends on the performance, if any one of us gets a spectacular finish I think we earn a title shot,” Burns added.

Burns is coming off a decision win over Stephen Thompson back in July. Prior to that, he suffered a TKO loss to Kamaru Usman for the welterweight title.

Do you think Gilbert Burns will beat Khamzat Chimaev at UFC 273?