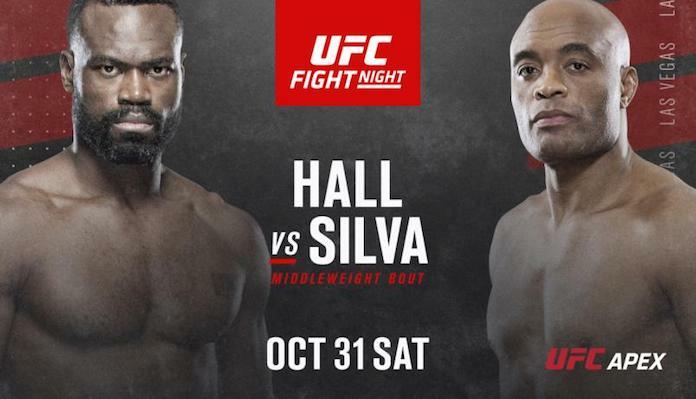 The full betting odds have been released for the 12 fights scheduled to take place at Saturday’s UFC on ESPN+ 39: Hall vs. Silva event.

The main event sees middleweight striker Uriah Hall take on UFC legend Anderson Silva in the final fight of Silva’s career. Hall has been an inconsistent performer over his years in the Octagon, but he has looked to be in top form as of late, winning three of his last four fights. As for Silva, he is now 45 and coming off of two straight losses, including a leg injury TKO to Jared Cannonier in May 2019. It remains to be seen what he has left.

The co-main event sees featherweight contenders Andre Fili and Bryce Mitchell battle it out in what should be a “Fight of the Night” contender. Fili has looked good lately, winning three of his last four fights overall, while Mitchell has gone 4-0 in the UFC and is unbeaten in his career at 13-0. The winner of this fight will be in a good position to take on a top-10 opponent in their next fight should they have an impressive victory here.

Check out the opening betting odds for UFC on ESPN+ 39 below, courtesy of MMAOddsbreaker.com.

In the co-headliner, Fili and Mitchell both opened at -110 Pick ’em odds. The early action has come in on Mitchell and he now sits as a small -150 betting favorite at most books.