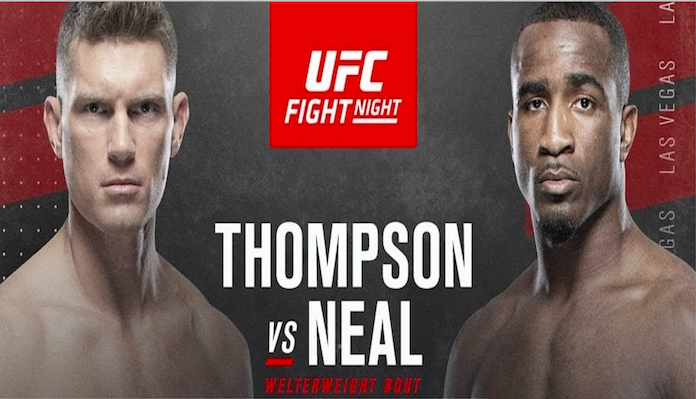 The full betting odds have been released for the 14 fights scheduled to take place at Saturday’s UFC Vegas 17: Thompson vs. Neal.

The main event sees former UFC welterweight title challenger Stephen Thompson take on surging contender Geoff Neal. Thompson last fought at UFC 244 in November 2019, taking home “Fight of the Night” in his unanimous decision win over Vicente Luque. As for Neal, he is 5-0 in the UFC and is coming off of a head kick TKO win over Mike Perry at UFC 245. However, Neal has not been able to fight so far this year due to some health issues.

The co-main event features former UFC featherweight champion Jose Aldo taking on the always-violent Marlon Vera. Aldo is coming off of a brutal TKO loss to Petr Yan at UFC 251, and overall he has lost three straight fights to Yan, Alex Volkanovski, and Marlon Moraes. As for Vera, he is coming off of a first-round TKO win over Sean O’Malley at UFC 252.

In the headliner, Thompson opened as a -115 betting favorite. That means that a $115 bet would win you $100. As for Neal, he opened as a slight -105 betting underdog. That means a $105 bet would win you $100. The early action has gone both ways, with a slight lean to Neal. In the co-headliner, Aldo opened up as the -125 betting favorite despite three straight losses. Vera opened +105 and so far the early money has been coming in on Aldo.

Check out the complete betting odds for UFC on ESPN 19 (via MMAOddsbreaker.com).