Former UFC heavyweight champion Francis Ngannou is preparing to make his boxing debut in July, and hopefully against a big name.

‘The Predator’ has been out of action since his heavyweight title defense against Ciryl Gane at UFC 270. Despite fighting with a devastating knee injury, Ngannou prevailed, using his wrestling en route to a unanimous decision victory last January.

The victory was an important one for the heavyweight champion, as it was his first title defense. More importantly, Ngannou’s contract was expected to expire that December. Thus, giving him the possibility to leave the promotion as champion.

Despite reportedly being offered $8 million, Francis Ngannou has declined to re-sign with the UFC. As a result, he was stripped of his title, and is now a free agent. The UFC later scheduled Jon Jones vs. Ciryl Gane in March for the vacant heavyweight championship.

Since then, the former champion has admitted that he’s not mad at the UFC, even stating that he could one day return. However, that won’t be next, as Ngannou revealed on The MMA Hour. There, he revealed his plans to box in July in his first professional bout.

Beyond that, the former UFC fighter named Tyson Fury and Anthony Joshua as ideal opponents. 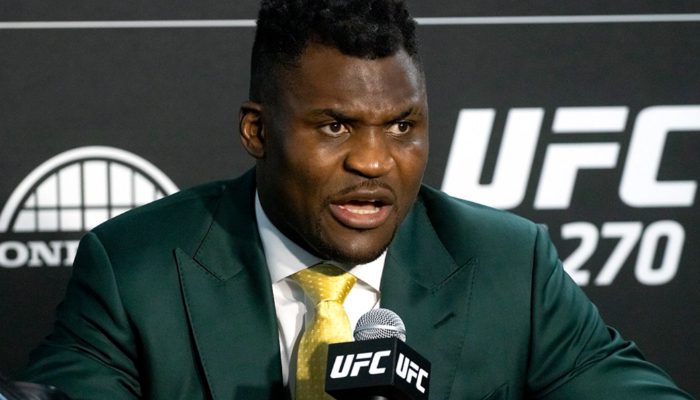 “Hopefully somewhere, the latest is July [for when I’d return], I’d say so.” stated Ngannou on The MMA Hour alongside Ariel Helwani. “Hopefully, at least twice this year. My gut says boxing, a pro boxing [bout]. I don’t know where, I’m going to find out. I’m working on it right now.”

Francis Ngannou’s comments about boxing Tyson Fury come as no surprise. The two men have teased an eventual clash since 2021, and Ngannou even entered the ring following ‘The Gypsy King’ knocking out Dillian Whyte last April.

What do you make of these comments? Do you want to see ‘The Predator’ box? Sound off in the comment section below PENN Nation!