Lewis (26-8 MMA) most recently competed at UFC Vegas 45 in December, where he earned his record-setting thirteenth career knockout. That win was preceded by a TKO loss to Ciryl Gane in a bout for the promotions interim heavyweight title.

As for the Aussie, Tai Tuivasa is currently on a four-fight winning streak, his last being a KO win at UFC 269 against Augusto Sakai. ‘Bam Bam’ can put himself in title contention with a win over Lewis this evening. 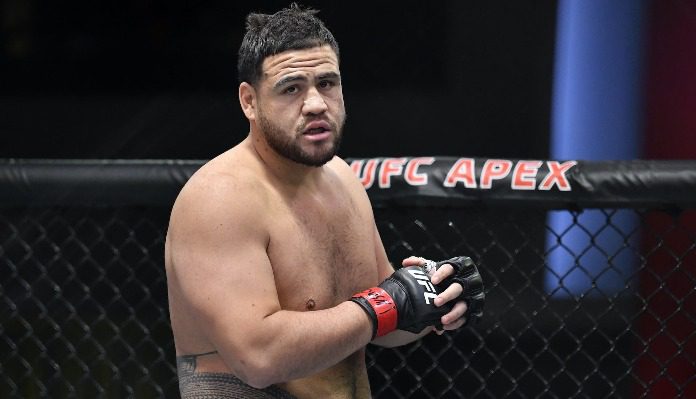 Round one of the UFC 271 co-main event begins and Derrick Lewis quickly takes the center of the Octagon. Tai Tuivasa circles to his right and then pumps a double jab. He looks for a low kick but misses. Another low kick and this one lands. Lewis throws a right but Tuivasa ducks under the shots and forces the clinch. The Aussie has the American pressed against the cage and lands a pair of knees. The referee steps in and separates the heavyweights. ‘The Black Beast’ leads in with a high kick. He follows that up with a flying knee attempt. Lewis pushes Tuivasa against the cage. Both men with knees from the position. Lewis looks for a single leg takedown but Tuivasa is able to defend. The Australian lands a nice elbow over the top. Derrick Lewis responds by landing a trip takedown. He begins unloading right hands. Somehow Tai Tuivasa survives those shots and gets back to his feet. He pushes Lewis against the cage. The fight goes to the ground. Lewis with some punches. Tuivasa scrambles back up and lands a knee. The horn sounds to end round one.

Round two of the UFC 271 co-main event begins and Tai Tuivasa lands a low kick as Derrick Lewis swings and misses with a right hand. ‘The Black Beast’ with a big combination. Tuivasa is hurt. He forces the clinch and Lewis dives on a takedown. Big punches from both men now. Tuivasa lands a standing elbow and Derrick Lewis is down. My gawd!

BAM BAM DID IT AGAIN!!

Who would you like to see Tuivasa fight next following his KO victory over Lewis this evening in Houston? Share your thoughts in the comment section PENN Nation!